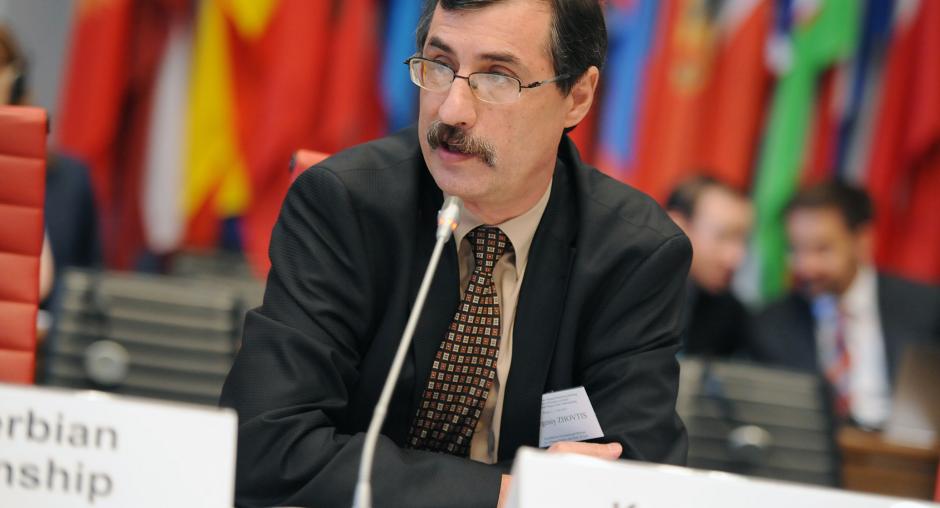 Talking Points of at OSCE SHDM III PRE-EVENT “The OSCE at the Turning Point: Impulses from Civil Society for reshaping the Human Dimension”

Apart from the human tragedies, tens of thousands of deaths, the destruction of cities, villages and infrastructure, the war in Ukraine has crystallised the problems the OSCE has been facing during more than two decades.

It should be recalled that the Conference on Security and Co-operation in Europe (CSCE) as a dialogue platform to discuss security, economic and environmental issues, and the human dimension, in other words democracy, the rule of law and human rights, was created in 1975. It was clear that the Soviet Union was not going to do anything with respect to the third basket of agreements, and it was absolutely pointless to discuss such issues with USSR. The collapse of the Soviet Union created the conditions for the dialogue platform to evolve into an organisation within five years, i.e. it gained an institutional development premised on cooperation in the implementation of commitments using the OSCE expertise and its structure. A number of important documents were adopted at that time, including at the Moscow and Copenhagen documents, in addition to commitments to promote democracy, fair elections, the rule of law, etc. which established the principle of extraterritoriality of human rights.

However, the conflicts in Moldova and the former Yugoslavia lighted up some problems in terms of the effectiveness of this mechanism. Since the late 1990s, it has become apparent that a number of countries in the former Soviet Union have once again begun to see the third basket of the Helsinki accords as optional. This is especially true of Russia, Belarus, Azerbaijan and the Central Asian countries, with the exception, to some extent, of Kyrgyzstan.

And in the area of the development of democracy, rule of law and human rights, the OSCE has again started to turn into the CSCE, or rather again from the organisation into a platform for fruitless dialogue. This is because it is practically impossible to reach any material results of dialogue on such questions between democratic states and totalitarian ones, to which Turkmenistan undoubtedly belongs, and authoritarian ones, with one or another degree of rigidity, to which other states I have listed above belong. The consensual nature of decision-making and the ineffectiveness of the OSCE as a whole, which blocks any attempts to achieve anything, was also demonstrated in our region during the events in Turkmenistan in 2002, the Andijan events in 2005, the events in Zhanaozen in 2011, and in Kazakhstan in general in January of this year.

The armed conflict in Georgia involving Russia in 2008, the annexation of Crimea and the invasion of Donbas in 2014 demonstrated that even the first ‘basket’ of the Helsinki agreements does not deliver. Moreover, the war in Ukraine shows that it is not about European, i.e. regional, but global security, where the problems of OSCE inefficiency are inseparable from the problems of the UN or its Security Council inefficiency.

The war in Ukraine has also created security threats for the Central Asian states, since Kazakhstan, for example, was also a signatory to the Memorandum on the non-proliferation of nuclear weapons, which, as it appeared, offers no assurances.

Finally, back in the 2000s I put forward the argument that democracy, the rule of law and human rights have four “enemies” in today’s world: gas, oil, the fight against terrorism (or the way it is conducted) and geopolitical considerations. These “enemies” are increasingly evident in both developing and developed democracies as well.  On top, the war in Ukraine has proven that all the baskets of the Helsinki agreements are interlinked, although in terms of the OSCE structure and the way issues are discussed, usually two baskets are discussed without much of involvement on the part of the civil society. Now, however, the second basket on economic and environmental cooperation has also become almost useless in relation to a number of ex-USSR states.

All this poses a difficult challenge for the OSCE, or rather for its member democracies. Especially in terms of what civil societies, human rights organisations and human rights defenders in different countries of the region are interested in: the development of democracy, the rule of law, respect for human rights and the expansion of space for civil society.

All the more so as no serious positive developments with respect to these issues have been achieved in the countries of the region, despite their numerous discussions in various OSCE fora, including HDIM. We still see varying degrees of persecution of the political opposition, human rights defenders and independent journalists, and a shrinking space for civil society organisations and media. Moreover, in some countries of the region a transit of power is taking place, somewhere through a kind of inheritance, somewhere as a result of intra-elite processes or internal conflicts. In Kazakhstan and Uzbekistan, for example, this creates some space for possible transformations and reforms, although against a backdrop of aggravation of social problems, high social inequality and a lack of justice in the broad sense, it also creates serious challenges, as the events that took place in January this year in Kazakhstan showed.

In this context, the situation has become more complicated for civil societies in Central Asia, for whom the OSCE is one of the few venues for expressing their views on the implementation of human dimension commitments. Incidentally, four of the countries of the region are members of the Shanghai Cooperation Organisation, which before India joined had been, if I am not mistaken, the only regional organisation in the world without a single democratic state among its members.

What is worrying is that in recent years, at the international level, Central Asian countries have been seen more in an Asian context, along with South and South-East Asian countries, even though this is a region of Eurasia. It is a region, which by the fact of being a member of the OSCE, is part of the perceived security and co-operation architecture in Europe. Our Kazakhstan, for example, has part of its territory in Europe and is already a member of the Venice Commission of the Council of Europe and of the European Football Association. It is neither a European region nor an Asian region, it is a Eurasian region with all the civilizational consequences that it entails. In addition, this region, like a number of other ex-USSR countries, has never undergone decommunization and de-Sovietization, which was clearly demonstrated in the reaction to the war in Ukraine, demonstrating the poisoning of conspiracy theories and the huge scale of manipulation of public opinion and propaganda.

One more thing. When we talk about the role of civil society, I think we need to pay attention to the fact that we use the word “international” in reference to the UN, the OSCE and other global and regional organisations. This does not seem to me to be correct. It would be more correct to call them “intergovernmental”. Because one thing is when states participate in these organisations, where the authorities are elected in free and fair elections and to some extent represent their constituents, i.e. the people of these countries and their interests. But when we are talking about totalitarian and authoritarian states, in international organisations they reflect their interests or the interests of the elites and clans in power, rather than their peoples.

This is why it is so critically important that active representatives of the civil society are involved in the discussions of all issues – security, economic and environmental, and the human dimension, which is becoming more and more difficult every year because the same totalitarian and authoritarian OSCE members are creating more and more obstacles to such participation by making procedures more complicated and by using pro-government organisations and GONGOs.

The Civic Solidarity Platform has over at least the last 10 years presented a range of recommendations in this area, which remain relevant, but the war in Ukraine has exacerbated everything and the challenges have become tougher, and sometimes it is simply a question of which security organisations are needed, how decisions should be made in them, and how these decisions should be implemented. Any platforms, including HDIM, should serve to find answers to these questions.

Thank you for your attention!