On the eve of the united meeting of the Kazakh opposition, the police routinely filtered the cities from everybody, who in their opinion could protest against the police outrage on the 1st of march.

On the morning, in the Kaskelen district of Almaty region unknown persons in civilian clothing

tried to catch the initiator from the establishment of the democratic party Zhanbolat Mamay at the entry of his house. His wife – journalist of the Bureau for human rights Inga Imanbay started filming the incident on her smartphone. Afterwards one of the attackers shoved her and she fell with her head against an iron fence, taking a concussion from it. At the same time the attackers took her smartphone and ran away, forgetting their original purpose to arrest Zhanbolat. 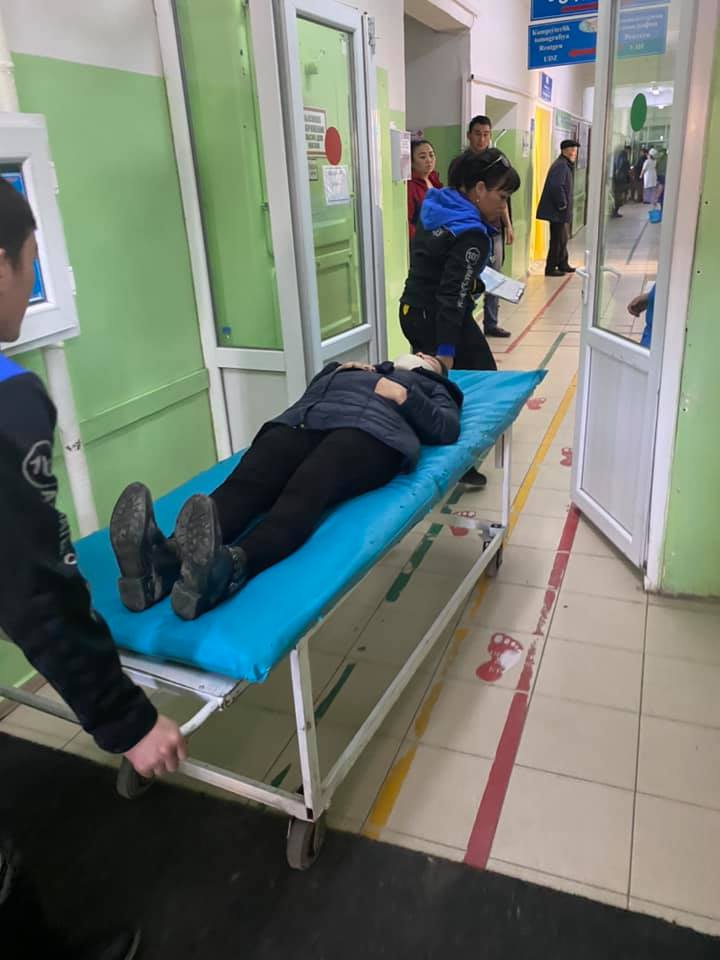 Closer to the nighttime the same faces visited the house of Zhanbolat again and gave back the stolen smartphone, which Inga “dropped“.

Even if it had been “security forces“ in civilian clothing, the concerns of Inga and Zhabolat are completely understandable.

On 22nd of February one associate of Zhanbolat Mamay – Zhanbol Rakhmatulla has been arrested in Karasay district. He was convicted to 15 days of administrative arrest and placed in the detention facility for “demonstration calling“.  His brother noticed after visiting him in the facility, that his nose was swollen.  The young men said that he was beaten up by the police while they carried him in their car. On top of that, any medical help was strictly rejected.

At the same time the Almaty police cordoned off the center of the city and fenced off the akimat. After the instructions of people in civilian clothing, the police efficiently caught everybody who was dangerously close to them.  Moreover, some of the civil activists have been arrested on the entries of their houses or at the fenced off area.

15 people have been arrested only at the Medeu dictrict, while a lawyer was not acquired.

In Atyrau at the area of the square the policemen caught about ten present people, One of them was the Human rights bureau employee Asel Nurgazieva.

At least four were convicted, one of them Asel’ Nurgazieva, who visited the place as an observer from the bureau.

The judge convicted her to a warning. Furthermore, Nurgazieva wrote that the big effort of the prosecutor Zharasa Diarova has led to taking the incident into protocol, although nobody has broken the law.

The “Azattyk“ radio reported, that 14 people in the capital were caught and “pushed in a prisoner transport vehicle, close to the Abay monument near the city administration.

According to the video, they were much more arrests.

The website Vlast.kz reported, that some were arrested near the building of the local office OSCE office.  In a live stream of Facebook user Bek Sabyrly, the man told that 14 people, including himself, were transported to the police department of the Esil district in a prisoner transport vehicle. In Chymkent not less than 15 demonstrators had been arrested, like “Azattyk“ reported. Some of them shouted “Shal, ket! “ (“Old man, leave! “)

Minimum three people had been arrested in Uralsk.

According to the information from the acting office director of Human rights bureau in Aktobe Irina Golivart, near to the regional akimat, another 15 people had been caught by the police. 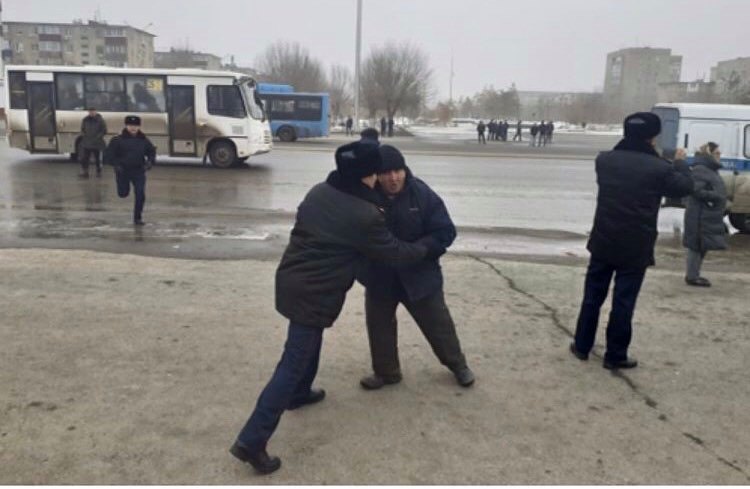 The Ministry of Home Affairs tends to present an inaccurate information regularly. The minister Turgumbayev announced, that “ca. 80 people had been taken to the police department“. “Almost everybody was let go after a preventive conversation, one was fined and three arrested.“

Besides the attack on Inga Imanbay, no other violent incidents involving the police have been reported. Although in the last months the police and special service officers started using “painful“ tactics, beating up detained, breaking their bones and torturing them in police departments.

On the 22nd February SOBR fighters broke the rib and caused contusions in the chest area of Erbol Alin, who was close to the Astana square area, where the policemen put hundreds of potential protest participants into prisoner transport vehicles.

Since the 27th of February Serik Askarov was missed in the capital. After, it turned out, that he was convicted to 15 days of arrest and is situated in the department facility with a broken arm from a very rough arrest in front of the Ministry of Home Affairs on the 25th of February.

There is still no criminal proceeding in relation with the torture of Erlan Faysullayev and Medet Arystanov in the police department of Almaty. Both were arrested on the 25th October of 2019. Both victims reported that part of the offenders were NCS officers. Now the NSC claims to make an inner investigation (although the law acquires, that acts of torture shouldn’t be investigated by the departments, who are target of the investigation)

Meanwhile, the Anti-Corruption agency considered that torture, which was confirmed by medical tests, doesn’t represent an act of crime.