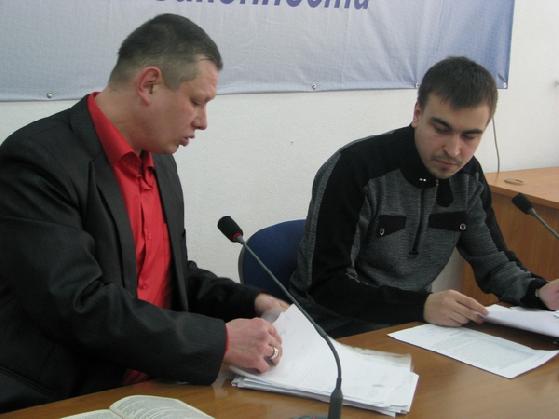 The
amendments to the Code of Civil Procedure that was made last year have already
made a lot of confusion in the work of the courts and especially the defenders.
Not only that citizen’s opportunity to represent their interests in the courts
was lowered, and judges did not understand the amendments or interpreted them
in fits and starts.

At the
press center of the Human Rights Office was held a press conference at which
the civil society activists Denis Alimbekov (PA “ARD”) and Andrey
Ushakov (NGO “Civil Defense”) spoke about the practice of the new
Code enforcement in Almaty.

Andrey
Ushakov, the head of the NGO “Civil Defense”spoke the first:

– This story began with the fact that on 4
February, we filed the statement of claim to Medeu district court in Almaty,
protecting the rights of a member of our association. And 9 February the judge
Musakhodzhayeva made the decision to of the abandon my application not only
without satisfaction and without any consideration, referring to the point
Civil Procedure Code as requiring mandatory submission of my higher legal
education diploma.

I sent a
letter in response to the judge Musakhodzhayeva in which pointed to the same
paragraph, which provides the right of the head of public organization to
protect the rights of its members, where is not stated the protector’s legal
education diploma. After the judge accepted our petition to review and assigned
it to February 20. But when we went to the court, on that day the judge refused
to us in a legal investigation for the same reason again.

We believe
that such actions of the judge are illegal because they seriously limit the
right to protect their interests in court. In support of its position I can
refer to paragraph of Regulatory Resolution of the Supreme Court of the Republic
of Kazakhstan that by “other persons” referred to in Article GIC,
should be understood the representatives of public organizations. All of this,
I also stated in written form and handed to the judge Musakhodzhayeva, but she
still stands her own and keep our petition without consideration.

At the same
days, when all of this happens, namely February 18 of this year in the
“Legal newspaper” published an interview of a member of the Supreme
Court of the Republic of Kazakhstan Vladimir Borisov with his comments to
various judicial collisions. And in one of his comments the judge of AF RK
directly pointed that a mandatory requirement of higher legal education diploma
should not apply to persons authorized by public organizations defend in court
the rights of their members.

As you can
see, different judges in different ways apply the same article of CPC, causing
suffers people who are trying to protect their rights and the rights of their
members in the courts. In addition, becomes meaningless the existence of public
organizations, which generally created for the joint protection the rights of
its members, including on the courts.

– This is a very dangerous precedent in terms
of restriction of the right of citizens to judicial protection, or even
depriving them of that right. In fact everyone can not pay for the services of
professional lawyers who charge for their services about 2000-3000 dollars, and
some of them even in this case do not show any particular activity on the
court. Therefore, people have to go to associations for the protection of their
interests, and now they are deprived of the right to such protection – added A.Ushakov.

Denis
Alimbekov the head of the NGO “ARD” support the position of the
representative of the “Civil Defense”:

– Our organization – a human rights
organization, I have repeatedly defended in a court different people as their
public defender, I had not any problems with tolerance. Recent changes in the
Code of Civil Procedure adverted that article where was introduced the 7
paragraph with the words “other persons with higher legal education.”
But it does not cancel the paragraph 4 remains unchanged with the words of
“persons of the authorized organization whose charter includes the
protection of the rights and interests of members of these organizations.”
That is the requirement of paragraph 7 about a law degree does not apply to us,
and to others who may also protect anyone’s rights in the courts!

Thus, is quite obvious for me that the judge of
the Medeu district court, which did not allow my colleague by advocacy Andrey
Ushakov to defend in court the interests of the members of his social
organization, thus violating not only the requirements of Article GIC
unreasonably opposed its one paragraph to other, but also did not observe the
requirements of the law “On Public Organizations”.

Denis
Alimbekov considered that the judge, who twice refused to consider the
statement of claim lodged by Ushakov, “she showed gross incompetent and
very strong reluctance to consider the specific case on the merits.”

Andrey
Ushakov said that they will lodge a private complaint on the actions of the
judge Musakhodzhayeva.

– I think this is a dangerous precedent, and
therefore I strongly support the decision of colleagues to lodge a private
complaint on the illegal actions of the judge Musakhodzhayeva. We will
definitely follow the process of this complaint, – he said.

Denis
Alimbekov proposed to hold for the judges of all district and inter-district
courts of the southern capital a training workshop on the uniform application
of Article of GIC and other procedural rules, in the application of which there
are different interpretations.