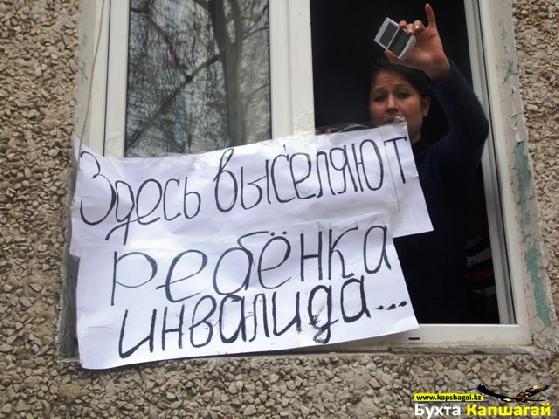 The situation of Shamaev
family from Kapchagaiy town is as hopeless as is typical to Kazakhstan because
in similar conditions have to be hundreds, if not thousands of other families.

The only property in the
form of more than a modest apartment, four women and two children – one of
which is disabled, lost 7 November 2014. How the eviction took place, you can
see in the video, where it can be noted that the local police could not bring
them- to display to the street a boy with a disability, instead of them it was
easily made by the judicial performer under a pretext that “they go for a
walk”.

Despite the fact that people
caught in the difficult conditions, paid a considerable part of the debt, did
not abandon their debt to the bank, the leaders of Kapchagai branch of “Temirbank”
found no reason to go to meet them and sold them to an apartment in absentia.
Courts and state agencies, including guardianship, also did not find anything
wrong in that the normal family suddenly appeared in the street, and children
became actually homeless.

Head of the family –
Svetlana Shamaeva – had given 14 years
to armed forces of the country, having worked as a medical assistant,
and  before thirteen years working as a
health worker in the hospital. Upon reaching the age limit for the military –
45 years old – she was fired without payment of a pension from the Ministry of
Defense. And as to the “civil” retirement age is still far – she was
left without a pension and work, but with a sick Nazar on hand.

Officials in Astana, with
which representatives of the homeless families met before and after the
incident, opposite, assured that no one can take away their home, especially if
the family is seriously ill child. However Astana is far from Kapshagai
authorities, and has no authority, and local leadership lives by his own rules…

What are the rules is best
demonstrated by publication in the newspaper “Caravan”, written in
the wake of the drama. When Shamaev family together with a reporter went to the
city administration to find out the position of the local officials, sick Nazar
became ill in a building of the city administration. The request to give the
boy a glass of water followed by a hard failure. So, the further comments just
makes no sense.

February 16 Svetlana and
Marianna Shamayeva with Nazar met in Almaty, in the press center of the Bureau for
human rights, with reporters. They arrived on the eve of an appeal to the
Regional Court judicial executors action, had not suspended the eviction
despite an appeal to the City Court Kapshagai.

– Amounts due to bank amounts 19 thousand dollars, the apartment is
worth 40 thousand dollars, I think the difference in the amount played a fatal
role in all these matters, because where we just did not apply, and in the
courts so far have filed lawsuits in the end we have thrown out – suggested Svetlana Shamaeva why the bank so
persisted in his efforts to deprive them of home.

Court in Kapchagai also
works quite frivolous. All Shamaev’s complaints received failures, and with the
motivation that “either they withdrew their claims to the court
administrator” or “did not come to court” (despite the fact that
they had not called there).

– However, for the third year, we continue to appeal in court this
situation, the apartment was on the arrest, and arrested the bank sold the
apartment to the owner. So we were evicted by the new owner, whom we never saw, – continues the story of Svetlana.

Now before Shamayevs there
was one more problem: children, having lost together with housing of a
registration, automatically became “homeless”. “We can’t receive
grants which are put in such cases”, – Svetlana, who besides Nazar also
has the granddaughter, which should go to the first class in the fall. For the
whole family works one daughter and is basic disability benefits and child
care, designed before the eviction. Moreover, the family still owes million
tenge before judicial executors for their “services”.

– I understand people who set fire to themselves because in such
conditions they drive us … I hold … I’ll hold on to the last, because I
have someone to hold, – says the
desperate woman.

According to Public Defender
Natalia Popova, who attended the press-conference, others, not the richest
residents of a small town from day to day can be on the street. Once again, the
banks are not only not going to make any concessions, have lost their jobs, but
also arbitrarily increase monthly payments.

– Just people in Kapchagai are systematically thrown away. It is not
even connected with the bank – just find those people who cannot stand up for
themselves, – she believes.

Until the spring the family
will live in a friends’ apartment. Already after receiving “kick”
from the region, local authorities also offered to Shamaevs temporarily to ped
down to the same pores, but the family refused from the second costly move.

The only thing that
Shamaeva  – as a special need – were put in the waiting list for public
housing. However, even in large cities, people can stand there for decades, and
even in depressed regional centers prospects can stretch to infinity.

Yesterday in Taldykorgan was
held a regular appellate review complaints about the actions judicial
executors. As reported by Marianne Shamaeva, the court missed the few minutes
without an invitation defendants, and, of course, not in favor of Shamaevs.

Message to this whole
situation has been sent to the Special UN Rapporteur for adequate housing. In
addition, the autumn Kazakhstan will report on compliance with the UN
Convention on the Rights of the Child, and the case of Shamaevs already became
one of the key Kazakhstan “case” clearly shows the difference between
declarations and practice.