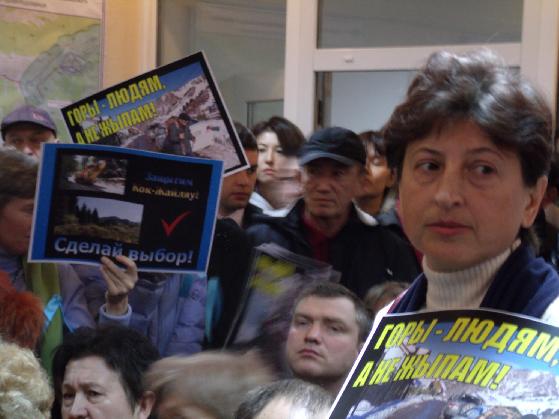 January
19 in Almaty hotel “Astana” have passed another hearing on the
construction of the ski resort “Kok Zhailau”. It was different from
all previous hearings that took place in 2013 and 2014, by more than a
scandalous situation. Participants of the hearings from the number of critics
of the “Big Kok Zhailau” Project have experienced a number of methods
and technologies from the field of “managed mass meeting” in the
application of that were accused the organizers from urban governance and the provocateurs
involved by them.

Kazakh
authorities intend to build a new ski resort in natural boundary Kok Zhailau,
near the largest city Almaty. In this case thousands of trees to be cut down,
moreover the ecologists warn that the construction of the resort disrupt the
eco-system and cause irreparable damage to nature. The construction of the
resort could cost nearly one billion dollars, and part of the money will be
taken from the budget. There are strong suggestions that under the guise of the
resort will start at this place the construction of villas for the super-rich
citizens.

January
20th the ecologists’ press conference was held, following yesterday’s
hearings on the project of SR “Kok Zhailau.” Speakers – ecologists
told about how this event passed and why it was so scandalous, and have rated
the actions of its organizers and executors. The speakers were activists of the
movement “Protect Kok Zhailau!” Abai Erekenov, Andrey Buzykin and the
chairman of Ecological Union “Tabigat” Mels Yeleusizov.

Before
the start of their speeches the video fragments were shown to journalists
yesterday made by Andrey Buzykin at the door of the hotel, in the lobby in
front of the hall and in the conference hall during the hearing.

As a
comment to everything that shown on the screen and in general to yesterday’s
hearing the leader of “Tabigat” Mels Yeleusizov described the current
practice of holding such events as a profanation of the concept of public
hearings and public participation in solving ecological problems of the city
and the region.

– The government is just pretends that it is
ready to listen and to take into account all the social consensus on this
matter, but in reality everything has already decided, and intends to do what
it is advantageous as it is convenient, – noted ecologist.

In
support of this statement, and impressed by the video shown one of the journalists
attended asked: whether not the speakers the impression that it earlier during
all the previous hearings two years ago and last year, the government really
pretended to be willing to listen to all, and decides on its own. Now it does
not want to listen to any critics just deciding not to allow the
“critics” to public events, and if they nevertheless break through
there, do not give them a word or physically muffle their voices.

According
by the reaction of the ecologists on this issue surveillance, exactly such the
impression had they, and the movement leader “Protect Kok Zhailau!”
Abai Erekenov said that about something like that he had warned in advance.

– Early as the end of last week, knowledgeable
people have warned us that the organizers of the hearings will fill the hall by
the specially introduced public to overflowing, no later than a half hour
before the official start of the hearing, and honestly will say to public
activists who come to 9 am: Sorry, but there is no place for you . So
personally, I came to 8:30 and immediately realized that our informant had
underestimated the ability of municipal government “organizers”. As
we later knew, two buses with the “correct” public detrained at the
door of the hotel even at 7:30, and at eight o’clock they were already
registered! – said
Abai Erekenov.

Attempts
to find out these people, who they are and how to get here, given the extremely
modest result: only a few people without naming their names and places of work
are very reluctant to admit that they are ordinary employees in government
organizations and members of the presidential party “Nur Otan”.

According
to observations of Erekenov, along with the “extras”, intended to
fill all seats in the hall and on the approaches there were involved even the small
groups of “bouncers” and “bullies.” In the event of a fight
or scramble, says Abay Erekenov, slightly apart from the hotel entrance the police
bus was on duty with shaded glasses through which nonetheless were seen riot
police, which did not take place during any of the previous hearings.

As for
the “bouncers” and “bullies”, according to Erekenov, they
planned brawl and torn the clothes on opponents of construction. All of that
was done either on the outer roads to prevent “who disagree” to go to
the hall and already in the hall, not to allow the social activists who broke
through the crowd into the hall to take the microphone.

– The president of the Ecological Society
“Green Salvation” Sergei Kuratov was not allowed into the hall by
physical impact –
says Abay Erekenov. – I was push out of
the doors by four healthy men who retreated slightly only when our activists
are also four together, pushed me behind, just shoved into the hall. The same
thing happened when I broke through to the podium, but thanks to my comrades
nevertheless broke to the microphone and protested against all this mayhem then
a microphone have very roughly snatched from my hands.

In the
words of Erekenov a microphone was also torn from the arms of a public figure,
economist, Peter Svoik as soon as he called upon the organizers of the action
to stop the ugliness and recognize the opponents of the project discussed their
right to stay in the hall and defend their opinions. That did not hinder Mels
Eleusizov during his quite critical speech. Probably, a certain quota of two or
three “wrong” speakers was still abandoned.

– People who are gathered there were about a
hundred – quite a lot for a small room, but very little for the two-million
city. With all the social passivity of most Almaty citizens and generally
Kazakhs in the past half year 27 thousand of our fellow citizens have already put
their signatures on a petition in defense of the Kok-Zhailau, and the
collection of signatures is still ongoing – said Abai Erekenov.

January
19 the past hearings he described as legally untenable, because in their
carrying out by the akimat were violated all the existing rules of such
hearings, including the prescribed Aarhus Convention on public access to vital
ecological information. Kazakhstan signed the Convention, thereby by putting
its demands not only on a par, but even slightly higher than the national
legislation (see art. 4 of the Constitution of the Republic of Kazakhstan).

On this
constitutional provision the ecologists always rely on submitted by them court
actions to Almaty city administration, as well as Kazakhstan and environmental
legislation, the requirements are violated, according to the plaintiffs – ecologists
at every step. And they are not only violated during the public hearings and
registration of their protocols, but in the derivation of lands from the state
fund Ile-Alatau National Park, and in the design of objects of SR “Kok
Zhailau.” And how much and what kind of gross violations will be directly
on the ground if will start the actual construction work!

About
attempts of environmental organizations “Protect Kok Zhailau!” and
“Green Salvation” to defend the native nature in courts and
international organizations reminded at the press conference the civil society
activist Andrei Buzykin.

– Unfortunately, none of these claims have not
yet been won, that no wonder in our dependent courts. But we are hopeful that
this wall will be possible to break through and therefore even more than once
or twice we will submit the new claims – he declared this extremely at its core
human rights-based approach.

He also
said that directed by the lawyers of “Green Salvation” the package of
documents on the Kok-Zhailau from December 18, 2014 is under consideration of
the International Committee of the Aarhus Convention Compliance. And the image
of the Wrongdoing State of this Convention, recalled Buzykin is very negative
impact on the overall image of any country.

– Is this image exactly need to Kazakhstan? – formulated a rhetorical question,
was not becoming less important of its rhetorical.

The
answer to it has to look for all of us.