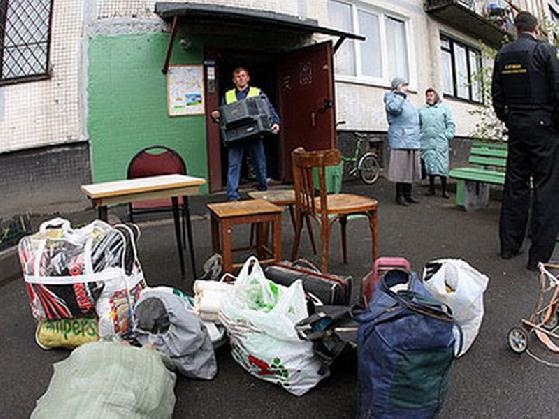 Two
non-governmental organizations – the fund “Society and Law” and the
republican public association “Talmas” – call the Kazakh
parliamentarians to adopt not only the negative experience of Russian
legislators, but also pay attention to the progressive initiatives.

The
fact is that on December 19 the Russian State Duma approved at the third
reading the law on bankruptcy of physical persons that minimizes the risks losing
a single habitation of from jammed up bank debtors. About the same law for
Kazakhstan the debate continues since 2010, but so far there is no progress in
this question

During
the press conference in Almaty the representatives of the above-named organizations
read out their appeal to the deputies of the Majilis. They recalled that the
bankruptcy law of physical persons, the assurances of Russian deputies,
“caused by the need to reduce social tension due to the serious economic
instability.” With that, possibly gave the impulse for early adoption of
the law the mass protests of Moscow mortgage holders who came to the office of
the Bank with posters “Currency Mortgages = life-time slavery” and
left at the walls of bank offices the keys to their apartments.

And
if “the difficult economic situation” in Russia has clearly happened
in the last six months, due to objective reasons – Crimea, Ukraine war,
sanctions, falling oil prices – Kazakhstan is in this mode has existed for five
or six years.

– In 2009, this law was appeared under consideration at our
Parliament too, but successfully was lost somewhere in the piles of papers – said Larissa Boyar, chairman of “Talmas.”

In
2010, Kazakhstan mortgage borrowers tried again to raise this issue in parallel
shaking the country by the protest actions – and there was a silence again.

– Please note. Our situation with the mortgage holders and
those who took a mortgage loan, is no better than in the CIS countries, perhaps
it is even worse! – she calls

All
this time, the Kazakh authorities acted with half-measures – somewhere was
permitted to protest, somewhere took stringent measures to suppress them,
somewhere organized the borrowers and banks joint meetings, but offering to
solve their problems themselves. The most that the authorities have
done – is to consider (!) the issue of adoption the
Memorandum not to evict the debtors during the heating season.

“What the cynicism! And you elected deputies who have repeatedly appealed
the mortgage borrowers applied themselves or through associations -are silent?! Is not it
time already to discuss the draft
law, and having taking into
account the suggestions of community
members – to give this law
a start in life?!”- stated in the appeal.

Why do the deputies so reluctant respond to the concerns of its
citizens? The answer is quite prosaic need only to dig into who really stands
up for banks. And then find out that practically behind every one is a state
official, as usual, in a high rank.

Mortgage movement was born in Kazakhstan,
proudly said another
member of the press conference – Bulat Aneta,
chairman of the board of trustees “Society
and Law”. Suffice it to recall such organizations as
“Leave people with habitation,” “Talmas”;
appeared from the
popular movement “Provide people
with habitation!”, which protest
actions battered a lot of nerves of the authorities. Due to the fact that the Kazakhstan
citizens have already experienced
three devaluation, and on the threshold stands the fourth, it
is clear that the chances to pay off the
debt for the most borrowers
are not real. And, then – we have again the evictions,
suicides and protests.

He also reminded that in 2009, the
banks with mortgage holders
took a Memorandum of failure the lawsuits to the courts for
two years. However, the deadline had
already expired and all returned
to normal. The more so that the courts often are held in absentee form, and then put the debtors before the fact
that they are not the owners of their modest square
meters. Again, in Russia, the Central Bank has agreed with the second-tier banks that payments of currency loans were transferred into Russian rubles at the rate of a loan. About
what is also requested our National
Bank, which is largely responsible for the collapse of exchange rate of tenge.

– In
his speech, the president said himself that he anticipated difficult times, those were his words. And I think we
need to go towards people – it’s just the duty of
our elected representatives and
our government. Probably we
should not hide the head in the sand – added B.Anetov.

Indeed, Nursultan Nazarbayev, in recent times, has repeatedly talked about his bad feeling.  While 7-8 years ago he called
Kazakhstan citizens not to be afraid
to take loans and to improve their living conditions.

The attention was drawn at one moment: in connection
with the adoption of new codes of law, again is actualized the question of the population living at
their residence, while the citizens deprived of their single habitation automatically lose their residence permit (and the job attached
to them) and become outside the
law.

But even worse, that it suffers
children, the disabled and old people,
while the social bodies that are supposed to express their opinion as when they conclude the agreements, well as if it comes to
evictions they are not in deeds. And the fact that in Kazakhstan throw out the families with children and
people with disabilities on the street, no one longer surprised.

If you evict a person, then
you should provide him another habitation,
it is written in the Constitution.
If you suppose evict
people from two or three-room apartments, you
should give him even the shanty habitation, but with
a residence permit – offers Bulat
Aneta for those who will take the law on personal
bankruptcy.

“We demand, given the experience of our neighbors
– economic partners and their response to the situation to expedite the adoption of the Law” On Bankruptcy “and to consider the
following amendments:

– Enter the term “a single habitation”, to determine the size of the real estate no
more than 120 sq.m.

– Determine the amount of the debt, at which the citizen can declare the bankruptcy.

-Attract in the bankruptcy case
the representatives of the guardianship
authorities, social protection and representatives of
NGOs, including the debtor with whom live minor children and the family members belonging to socially disadvantaged categories.

– Provide for five years installments
to pay the judgment debt, provided that the borrower has a stable source of income. “- Stated in a statement released
on behalf of the two organizations, closely working with the problems of bank borrowers.

At present, according to National Bank data, more
than 3 thousand people have
difficulties with the repayment of the loan in the republic. According to community members, such people are ten times as big.