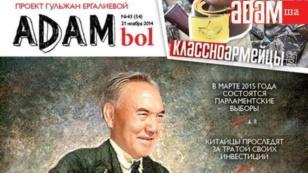 The
theme of the press conference – the opportunity to finally close the opposition
newspaper.

On 20
November the Almaty district court handed down an injunction to stop the
distribution and publication of the ADAM bol magazine. Furthermore, the court
also ordered the confiscation of all printed copies of the magazine. The
injunction followed a claim from Almaty City’s Department for Internal Policies
that an article published by the magazine on 28 August engaged in extremist war
propaganda.

OSCE
Representative on Freedom of the Media Dunja Mijatović said that a court
injunction forcing the shutdown of the weekly magazine ADAM bol in Kazakhstan
poses a threat to free media in the country.

– We, the
members of the Board of Trustees of the magazine «ADAM bol», decided to turn to
the Kazakh public and private letter to the president of the country – said
Tolegen Zhukeyev opening the press conference and made an important clause.

The
aspiration of defenders of the persecuted magazine to be heard by the Head of
State explained the human rights defender Yevgeny Zhovtis:

– The
current situation has occurred as a result of the indiscriminate distrust of
Kazakhstani citizens to legal institutions. Our people are not used to believe
in the legal institutions in their ability to solve problems in the legal
field. Our citizens more trust in persons and their personal authority than in
the world practice of democratic institutions – said Zhovtis.

To the
questions asked by one of the journalists about the prospects of the now under
consideration case at the suit of the akimat of the southern capital to close
the magazine its editor in chief Gulzhan Ergalieva said:

– We do
not plan to lose the case, but even if we lose, we will not give up. It is
still premature to draw any conclusions. The opposite side was hoping for a
quick outcome of the case and railroads the material anyway. They did not think
that we would resist whatever else might follow- added Gulzhan Ergalieva.

For a
given by another journalist the question about the political motives of closing
the magazine «ADAM bol» replied Tolegen Zhukeyev:

These
reasons are obvious: there is the general line of authorities aimed at
suppressing freedom of speech, freedom of opinion, restrictions on political
freedoms of citizens of Kazakhstan, put down dissent among the media.

On the
same day continued the court hearing at the suit of akimat to opposition
publications. At the previous court meeting the plaintiff’s representative of
the Department of Internal Policy of Almaty city administration asked two
working weeks for making the act of linguistic expertise. That expertise should
prove the presence of war propaganda in the Ukraine in the form of callsl to
the war in the same journal publication. December 22 at the Court session, Mr.
Aldabergenov finally presented to the court the act of politological expertise.
In its turn the defendant party presented to the court the act of linguistic
expertise executed by Candidate of Philology Rahilya Karymsakova from the
Center for Independent Forensic Expertise, acting under the International Fund
for Protection of Freedom of the Press “Adil Soz”.

Another
petition was of summons of Russian President Vladimir Putin who made a
statement one of these days that the Russian volunteers fighting in the Donbass
by the call of the heart and therefore can not be considered as mercenaries,
and even earlier, in mid-November, declared justified character of the war
waged by militias DPR and LPR. The defendant’s lawyer Sergei Utkin
substantiated those petitions that Aidos Sadykov in the same interview with
Miras Nurmuhanbetovu talked about the justified character of the war waged by
the Army and the National Guard of Ukraine, and volunteers that support them.

Once
again, the judge Abisheva rejected the another application of the defendant –
Director of NGO “Adamdar” Ayana Sharipbayeva and the chief editor
Gulzhan Yergalieva about the exculpation from circulation and the ban on
further issue of the publication.

The next
court hearing is scheduled for December 23, and it should begin with a study of
acts of expertise. Now at least we finally hear n what exactly consisted the
calls for war and war propaganda, seen by “political directorate” of
the akimat of the southern capital in the August interview with Aidos Sadykov
“Our people in a foreign war.”