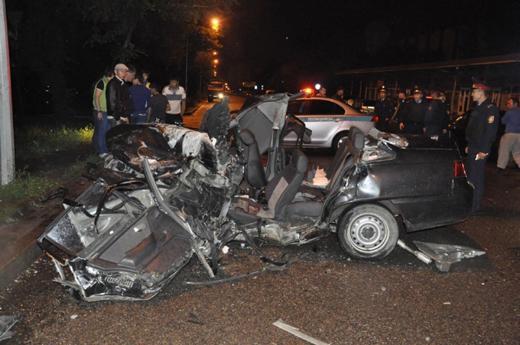 A
terrible accident has led not only to human victims through the fault of cadets
of Almaty police academy. There was the casual witness on the dock, who
manfully pulled the passengers from the crumpled cars.

The
former Professor of Political Economy, who was engaged in the construction
business, 54-year-old Agishev Farhat, who lost his daughter in the accident,
had to do all the work, instead of police investigators and even more – he
revealed so obvious discrepancies that already demonstrated not even
unprofessionalism of ” investigatory powers” but a deliberate attempt
to present the legal case in a very different way.

The
incident took place in the center of Almaty – at the intersection of
“presidential track” on Furmanov St. and Tole Bi St. At night,
September 24, 2012, the car in which were Farhat Agishev’s wife and daughter,
hit a “Mercedes”, at high speed, ignoring the red light, where were
two police academy cadets and a younger brother of one of them. All of them
died. Dilara Agisheva died also. She died, leaving many questions. In the press
center of the Human Rights Office her father has shared with the results of his
own investigations, which are radically different from the official version.

December
13 of this year Farhat Agishev met with a representative of the Investigative
Committee of the Ministry of Interior, who came from Astana. At that meeting
were also invited employees of DIA of Almaty implicated to the clarification of
the incident by omission or counteract. Including the former investigator, the
captain Sharipov, all started from him (he is the head of the department of
investigations of accidents DIA now). Before the Investigative Committee has
laid down three volumes – three criminal prosecutions, thanks to constant control
by Agishev, are impossible to close. The employee of the investigative
committee, recognizing the argumentativeness of evidence, produced by Farhat
Agishev, promised to prosecute an inquiry again. At the same time the police,
already five times (!) tried to close this criminal case, and all five times
city prosecutor’s office, due to the hardness of dead girl’s father, returned
it for further investigation.

–I am an adequate man, I’m not going to put
in the dock a man who is dead, – says F.Agishev, – But all that related to the case, what was happened after, starting
with rigging scheme of road accident, should be allocated in a separate proceeding,
only then the case may be closed.

There is
another “but.” Young guy Alexander Slastuhin who was pulling out
people from burning vehicles, became even the principal witness, had time to
tell to arriving TV men, what was really happening. But later he was charged of
stealing Dilara’s “iPhone”, though her father phoned on the phone of
his daughter when she was still alive and was in the emergency hospital. And
that’s just one little inexplicable circumstances of this case.

In the
first place the scheme of the accident, compiled by Sharipov, contrasted with
the testimony of witnesses and factual materials. And if it were not for
witnesses and Agishev‘s perseverance, they could make the injured party as the
culprit – and everything was going to that. Thus, were two schemes in the case
file- falsified (there are two examples – by the scheme, the injured BMW was
located by seven meters farther than in reality, and torn in two
“Mercedes” which was presented as the undamaged car); and the scheme
close to the truth composed by the investigator Musayev.

Another oddity
investigation was regarding the cameras. Ostensibly it was at the same time when
the camcorder onto the governmental track was refused to work.

As for
his daughter’s phone – even some kind of hell was happened to it.

As
already mentioned, F.Agishev had the confirmation that he called to his daughter‘s
phone number and spoke with her when she was in the hospital. And at the same
time Slastuhin was giving a lengthy interview to the journalists of
“Raider”. Accordingly the logic, the witness Slastuhin could not use
it, even if he wanted. But according to the call details, it became clear that
somebody called from her phone (when the girl was already died), and even to
the other witnesses of road accident – it became clear that their phone numbers
could know only in the police. Nevertheless, Alexander Slastuhin confessed to
the theft and was appeared in court.

Although he could not answer the easiest
questions – even what was the phone screensaver? 3 April 2012 he was suspended for
stealing a phone. The investigation actually returned Dilara’s iPhone to
relatives on Feb. 1. During the trial, Farhat Agishev appealed to the court
with a single question: “How could Slastuhin pick up the phone on the
pavement at 2.25 a.m., when I called to my daughter’s phone at 2.45 a.m., and
she was in the emergency hospital at that time?”

However,
the judge of the Medeuski district court Mr. Totybay-Tegi could only answered,
“Farhat Narimanovich, I do not understand you, the phone was also returned
to you?”

Did not
coincide the itemized billing, those were issued to Farhat Agishev by K’cell Company
(after four refusals to provide them to the investigation!) and the police. And
nevertheless, the issue details of IMEI-code that could allow tracing the route
were not given by K’cell Company on the pretext that “it might affect the
constitutional rights of subsequent users”. In the received call details were
missing numbers of base stations, could be missing the first digits (when the
calls were really from the person who had the device).

Even
more strange movements happened around the dying girl. The investigator
Sharipov went to the emergency hospital, but nobody knows – did he find a girl
alive or not.

But
Farhat Agishev was able to obtain a copy of the report compiled by a doctor
Suleimenov, in relation to the hospitalized girl. The investigator made the
decision to appoint the MEA into the death of Dilara with indicating “was
died in a traffic accident”, on that the expert in a morgue Shamenov in
his expertise already elaborated – “was died at the scene of the accident”,
though the girl was still alive in the hospital at least an hour. In the same
expertise Agishev found the other five strangenesses – the attempts to exert
her the first aid at the accident scene were not indicated (that was seen by
witnesses), there were serious discrepancies related to the spine, ribs and
kidneys. And finally, “the spleen was removed”- it was indicated in
the MEA – on what then they gave the answer, allegedly there was a typo. Maybe
it is so, and spleen were not left on the side, but piling up so many
inaccuracies in one expertise, when there are many gaps investigation causes
more than a strong suspicion – something is really wrong.

-I suppose “incompatible with life
injuries” were set out intentionally in the expertise of the morgue, once
again to thereby confirm that the doctors could not do anything, – speaks F.Agishev.

She was
hospitalized to the hospital with internal bleeding diagnosis, and according to
the papers, they began to make her chest compressions for thirty minutes.
However, with this diagnosis, as pointed out by experts, such manipulation – is
a direct path to the other world, and physicians should know well about it.

– Actually, no medical assistance was provided
to my daughter. They just threw her, – bitterly ascertains his version girl’s
father.

The
doctors indicated the time of her death – at 3:00 in the morning; she was
admitted at 2.40 a.m., but on X-rays and ultrasound is automatically reflected
the time in seconds. And it was clear that they made an x-ray to girl at 3.30.
a.m. “Then what is it, a mockery of a corpse?” – Almost exploded
Farhat Agishev.

Only 15 months
later her father managed to convince the investigators to initiate a criminal
case on the article 114 – the inadequate performance by health professionals of
their professional duties.

All this
nonsense imposed on his own scheme of an accident, the investigator Sharipov
added to a criminal file, after that he managed to safely disappear from the
reach of the victim.

Why are
so many lies around the one of road accident? All can converge there – and the unwillingness
to wash another dirty linen in public (there were witness statements, about the
smell of marijuana from the apartment rented by future guardians of order); and
the unprofessionalism of doctors and possibly the criminal omission; the
episode with “typo” associated with the withdrawal of the spleen, was
stayed behind the scene once again.

The
expert at morgue, and the head of K’cell Company had not vested interests, «it
means someone asked them,” – says Farhat Agishev. The same powerful
“someone” could even turn off the camera (at least on paper) on the
presidential track.

– It is clear that this accident would not adorn
the portrait of the Academy of DIA. I can understand that. There was a desire to
close the road accident without publicity out of corporate interests,
indestructible brotherhood. I can understand within this framework. But what
was happened after that – it was the initiative of the investigation, – explains his vision Farhat
Agishev.

Now this
case besides the Investigative Committee of the Ministry of Interior is engaged
the Department of Internal Affairs of DIA Almaty.

-It is only the beginning. – warns the girl’s father. – The main thing is that in two years I
have not given bury any aspect of this case.

However
it should be noted that all the work was made for the investigating authorities
by not a professional cop but a competent man, who is more than persistent and
has some ability. Most of people, who find themselves in similar circumstances,
have not anything like this. We may only rely on the investigation, which is
often performed exactly as it was written in this material.