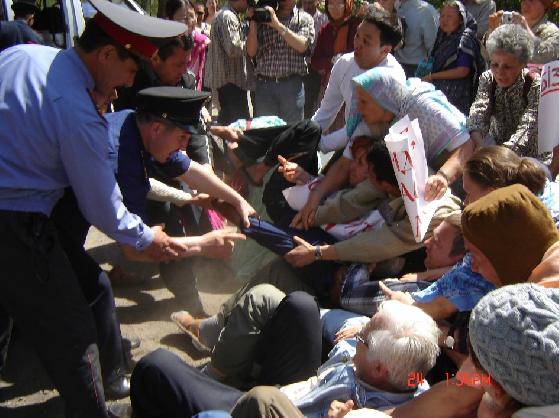 The following summary is based on Kazakhstan International Bureau for Human Rights and Rule of Law (KIBHR) monitoring findings[1]. For the second quarter of 2013 (April-June) KIBHR monitors recorded 46 assemblies.[2]


All assemblies were peaceful. Only one assembly, of ethnic Kazakh returnees (Oralmans; ethnic Kazakhs from other countries who have immigrated to ) living in Shigys settlement near Oskemen on May 23 could have led to public disorder and was stopped by policemen.[3]

Policemen continue to practice an individual approach with regard to imposing sanctions and penalties after an assembly, apparently depending on the subject of each individual assembly and its organizers/participants, rather than standard legal requirements. As a rule, they do not persecute organizers/participants of assemblies held without permission when the subject of the assembly does not address internal social or political problems or when organizers/participants are from pro-governmental parties or movements. For example, participants of the non-permitted assembly in Astana who demanded an impartial and fair trial in thecriminal investigation initiated against a Kazakh student connected to the bombers were not penalized. Similarly, a non-permitted assembly in Stepnogorsk devoted to the problem of bad roads was held without sanctions or penalties.

Law enforcement bodies demonstrate a completely different approach toward civic activists with critical views, in particular to those who raise pressing social problems. As a rule, all assemblies organized by critical activists were restricted either prior to the assembly or during it with sanctions and penalties imposed on organizers and/or participants.

For example, on May Astana 60 participants of “Leave the Houses to People” Movement were arrested after they gathered in the capital to hold an assembly near the building of the Presidential Administration. The court found five of them guilty of organizing and conducting an assembly without a permit: two received fines, and three were sentenced to jail for 7 to 15 days.

The morning of June Almaty, policemen detained Murat Telibekov (the head of the Muslims Union) and delivered him to a police station, where he was accused of organizing a non-permitted assembly.  In the evening the same day he was found guilty and penalized with 7 days’ arrest.

The reaction of law-enforcement bodies to the assemblies not permitted by akimat varies from region to region. For example, in law-enforcement bodies did not initiate any administrative procedures against organizers/participants of assemblies in spite of the fact that all four assemblies were not given permission by the akimat. Yet in Shymkent policemen imposed restrictions on a music competition where young Kazakhs played the dombra (Kazakh national music instrument).[4]

The trend of change in the subject matter of assemblies continues in . Assemblies devoted to political themes have almost completely disappeared. During the second quarter of 2013 social protests (against the increase in women’s pension age, for legal compensation for eviction from housing, over housing problems, bad roads, etc.) dominated the political.

The trend of decrease in assemblies organized by opposition political parties also continues.  During the second quarter of 2013 there was only one assembly held by former activists of Alga! party against the deportation of MukhtarAblyazov’s wife and daughter from to .

In Almaty there also appeared a new social movement (without registration) Birge (Together), the participants of which are active in organizing and conducting assemblies on social and economic problems.

[2]Monitoring of assembly is through personal observation as well as through media and social networks.

[3]People assembled due to electricity being shut off, and went to Oskemen from “Shigys” settlement. During the protest the participants attacked policemen and journalists, threw stones, and tried to overturn cars.

[4]On June Abay Park of Shymkent, young people gathered for a competition in playing dombra.  Policemen demanded they stop the competition or face sanctions and penalties for participating in an assembly not permitted by the akimat.