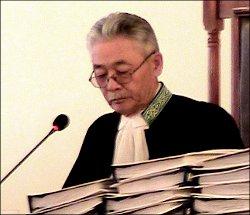 The court case against well known opposition activist Vladimir Kozlov and civil activists Serik Sapargali and Akjanat Aminov continues in Aktau (). The case began on 16 August, with nine witnesses questioned between 16 and 21 August, however none of them confirmed the accusations of inciting social upheaval, calls for forced regime change and organisation of a crime gang. The case against the accused completes the chain of cases of the Zhanaozen riots of December , this is believed to be the first political court case.

Witnesses say that Mr Kozlov, the leader of the opposition unregistered party “Alga!” had met oil workers, but nobody remembers him calling to bring down the constitutional order. KazMunaiGas HR department head Amantai Madinov remembers seeing Kozlov speaking on YouTube, but cannot recall what he was talking about.

Oil workers’ strike activist Natalya Azhigaliyeva, another prosecution witness, accused two of her former comrades of inaction: she claimed that the opposition activists promised financial and legal help and negotiations, but reality this consisted only of trips and PR during the strikes. Ms Azhigaliyeva said that she did not see the leaflets on the bases of which the activists are accused of inciting social disunity, but she had heard of them.

Burgilau employee Estai Karashev said that he met Kozlov once in 2010 and got 230,000 tenge from the opposition activist, in order for one of the oil workers to go to the opposition referendum. However, Karashev was beaten up and robbed the same day.

Experts who analysed the intercepted conversations from the Alta! Skype conference and Kozlov’s phone conversation with director Bolat Atabayev were questioned in the court. The court was not interested in finding out on what basis the calls were listened to. The experts, who were only given a part of the transcript, concluded that the Skype call had a hidden subtext, which contained calls to bring down the authorities. According to Aset Svankulov, specialist from the judicial expertise centre of the Ministry of Justice, the words “treff”, “buck”, “yonder”, “oraza” and “claptrap” had a hidden meaning and different definitions, which were inextricably linked to the accusations. Roza Akbarova from the Almaty centre of court expertise said that these negotiations contain “social revolt, which is growing into a resistance against the authorities and into growing political claims”. Senior specialist of the organisation of court expertise of the Ministry of Justice Dinara Mombekova concluded that “Muhar Ablyazov was the leader of the Alga! Party and gave the order to overthrow the authorities. This is why they needed to exploit the conflict situation with the oil workers, mortgage holders and miners.”

Amengeldi Akashev, faculty member of the West Kazakhstan Institute of Psychology, conducted a psychological examination of the accused. He said that Serik Saparagli is “a loser” (because he did not become the boss) and is “pathologically stubborn” (because he participated in 11 protest actions.) The expert said that Kozlov “did not have high intellectual potential” and a lack of “classical higher education”.

Many observers believe that the results of the case have already been determined: Vladimir Kozlov will be found guilty of the Zhanaozen riots, and Sapargali and Aminov will escape with light punishments. Some Western politicians are beginning to voice their attitude to the court. Member of the European Parliament Marek Migalsky said that “the case against Vladimir Kozlov is politically motivated” and called for the campaign against Kozlov to be stopped and the case against him to be dropped.