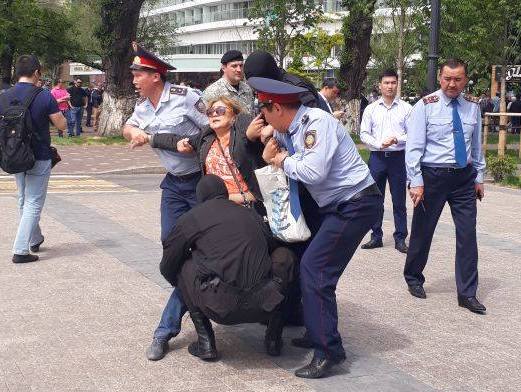 To the President of the European Parliament, Mr. Antonio Tajani

To the High Representative of the EU for Foreign Affairs and Security Policy, Mrs. Federica Mogherini

On May 10, 2018, in connection to the arrival of the EU Parliament delegation, citizens gathered for a protest action in eight cities of Kazakhstan, demanding that political prisoners be freed and an independent and impartial investigation be conducted into alleged tortures. The protest action was addressed first and foremost to the EP delegation, its aim being to draw MEPs’ attention to the scale and urgency of such problems as the use of torture in detention facilities and political persecutions. This is why one of the main protests took place in the capital of Kazakhstan, Astana, in front of the EU Delegation office. Activists of the DVK movement (the Russian abbreviation for “Democratic Choice of Kazakhstan”, which is the opposition force that was declared “extremist” at a closed court hearing on March 13, 2018 at the request of Kazakhstani authoritarian government) who had initiated the rally, wrote about the peaceful nature of the protest in social media and declared that they wanted to give a letter to MEPs. All the participants were certain that, as the representatives of democratic Europe, the MEPs would meet with representatives of civil society and prevent any acts of force on the part of the Kazakhstani authorities. However, despite the totally peaceful nature of the protest, police resorted to brute force while detaining the protesters and arrested everyone 10 or 15 minutes after the rallies had begun. In Astana alone, police detained over fifty-five people. According to human rights activists, the general number of people who took part in the protests all over the country was over two hundred and fifty. Administrative courts held hearings until late at night and ruled to arrest thirty-seven people. The rest of the detainees were fined. Additionally, over five criminal cases were launched in different cities. All the detainees signed an agreement not to take part in DVK-initiated protests in the future.

In 2015, Mr. Maina Kiai, then the UN’s Special Rapporteur on the rights to freedom of peaceful assembly and of association, paid an official visit to Kazakhstan. Civil activists gathered for protest actions in different cities of Kazakhstan in order to draw his attention to the peaceful assembly situation in the country. Mr. Kiai found an opportunity to meet with civil society representatives and to express his solidarity and support for their right to peaceful assembly. Nobody was detained; after his visit, Mr. Kiai wrote an official report on the human rights situation in Kazakhstan.

Unfortunately, the MEP mission of May 10–11, 2018 not only failed to meet civil representatives, but also never publicly expressed its attitude to the actions of the Kazakhstani authorities, such as the dispersal of peaceful protests, political persecution, arrests and torture. By their silent consent the MEPs expressed support for Kazakhstani authoritarian government, which was a source of great disappointment to us.

We hereby call on you to examine the human rights situation in Kazakhstan and publicly express your position on the political persecution of those detained on May 10, 2018, on the respecting of the right to peaceful assembly and the freedom of expression in Kazakhstan as part of the Enhanced Partnership and Cooperation Agreement between the EU and Kazakhstan.

This appeal has been signed by over two hundred people, including:

Rozlana Taukina, president of the Federation of Equal Journalists of Kazakhstan, Almaty

Zauresh Batalova, president of the Development Fund for Parliamentarianism in Kazakhstan, Astana

Yevgeniy Zhovtis, director of the Kazakhstan International Bureau for Human Rights and Rule of Law, Almaty

Ramazan Yessergepov, Chair of the NGO “Journalists in trouble”, Paris