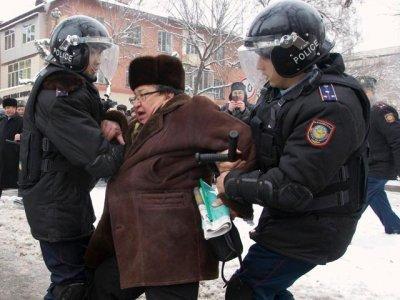 As Kazakhstan approaches its
23rd Independence Day anniversary, citizens and human rights experts discuss
where the country is moving with its democratic record. In the last four years
Kazakhstan has increased persecution of religious and political groups,
analysts say.

Better than Turkmenistan and
North Korea…

“If you look at some of the
African or Asian countries, Kazakhstan will probably look like a more civilized
country that has some respect for human rights and freedoms. I mean, when I
walk on the street I don’t feel like the police and other authorities are
watching me or trying to limit me in any possible way. But I know that if I try
to protest the government or its decisions, things will quickly change for me,”
says Dinara K. a law student at Nazarbayev university, who recalls the 2011
Zhanaozen tragedy. In 2011 at least 14 protestors (unofficial sources claim the
number was closer to 100) were killed in clashes with authorities in Mangistau
Oblast’s town of Zhanaozen.

Dinara, who says the events
in Zhanaozen inspired her to become a human rights lawyer, adds that “there are
many other examples of human rights violations in Kazakhstan, such as cases
with HIV-positive citizens, prisoners and others.”

“But because we are in
Central Asia, where there are worse human rights violators, like Turkmenistan,
not much attention is paid to us”.

Director of the Kazakhstan
Bureau for Human Rights Evgeny Zhovtis, who was imprisoned from 2009 till 2012
(was released during a mass amnesty) for a traffic violation, also says that in
comparison to Uzbekistan and North Korea “Kazakhstan is in a better situation”,
but there are many problems, in particular “violations of freedom for assembly,
freedom of speech and many other political freedoms. This is happening because
our justice system is corrupted, and justice is not guaranteed”.

“We still have independent
media organizations that cover corruption in higher echelons of government,
presidential family, persecutions against opposition and pressure on human
rights defenders. But the number of such media organizations decreases under
government pressure,” he said.

Zhovtis reminds that after
Kazakhstan became independent in 1991 the country saw a renaissance in the
development of oppositional movements and free media, but, he says, it all
ended in 1995. “At that point a number of elite groups have used the
privatization process to claim ownership of previously government-owned
property. To make sure nobody talks about it, certain measures were introduced
to pressure independent media,” he says, adding that after the revolutions in
Georgia, Ukraine and Kyrgyzstan the government felt even more insecure and
increased pressure on independent organizations.

Almaty-based Helsinki Human
Rights Committee Chairman Ninel Fokina says the human rights situation in
Kazakhstan is rather stable, but poor. She says is primarily concerned about
violations during the election processes as well as religious freedoms.

“In human rights sphere
Kazakhstan doesn’t really have a lot to be proud of. The only two positive
things that I can recall: when Kazakhstan placed a moratorium on death penalty
back in 2003 and when Kazakhstan abolished exit visas (citizens had to obtain
permissions to exit the country to travel). These two things were holding us in
the Middle Ages, but otherwise there’s nothing to be proud of,” she said.

Economics Professor at
Almaty College Nazira Usmanova says Kazakhstan has been independent for only 23
years, and as years pass, the human rights situation will get better.

Human rights activist Zhanar
Sekerbayeva, however, says this isn’t an excuse for Kazakhstan.

“All human rights movements,
media, activists, they disappear soon after thy start their activities. This is
happening because of the pressure from the government. Until that changes I
doubt there will be improvements,” she adds.