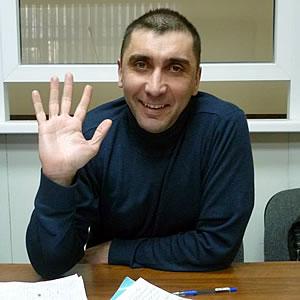 CopyNews
has reached Campaign Kazakhstan that Vadim Kuramshin, the renowned political
prisoner in Kazakhstan, has been badly beaten and intimidated. Before his
imprisonment, he was an active campaigner against torture in the prisons and prison
colonies of Kazakhstan.

Due to
the clamp down on information we can only give a few details. During the latest
visit by his wife, Vadim was accompanied by five guards with truncheons to
prevent him speaking openly. We are awaiting the results of a proper
investigation which should be carried out within a month.

At the
beginning of April, thanks to campaigning by his supporters – both within
Kazakhstan and internationally by Campaign Kazakhstan – Vadim was transferred
from a strict prison regime to a regime in which conditions are supposed to be
more relaxed. However, it is clear that the prison authorities had other
intentions.

Worrying
information has been appearing for some time – from a number of sources, as
well as from Vadim himself – that he was being openly harassed and that
attempts were being made to find any excuse to punish Vadim. The prison
authorities were not able to make open attacks on Vadim at least until the end
of last year. Then, because of the worsening situation, Vadim felt so concerned
he announced a hunger strike at the end of February. After concessions from the
prosecutor’s office, Vadim abandoned his protest.

During a
recent visit from his lawyer, however, Vadim showed signs of bruising and one
of his eyes was bloodshot. Although it was clear that he had been attacked,
Vadim himself refused to confirm this and was more concerned that he should be
transferred to a new prison.

When
Vadim’s wife, Ekaterina, tried to raise the issue with the prison authorities,
she was refused the right to even register a complaint. She did not want to
push the issue too hard as Vadim was due a three day visit from his family.

During
this visit, Ekaterina noticed that Vadim was obviously under psychological
pressure – he had difficulty expressing his thoughts, was nervous and hardly
ever sleeps. When she asked Vadim how he had received the bruises, he simply
said he “had fallen”. Vadim did say, however, that the prison authorities had
warned him that if any more complaints were made, “the next time he would be
beaten by those who had not yet managed to do so!”.

Ekaterina
comments that both she and her husband are “angry to the depths of our souls at
such threats” and she is calling for Vadim’s immediate transfer to a colony
nearer to the capital.

On the
way back from her visit, Ekaterina’s car caught fire and she was nearly
involved in an accident. Her car had been in the care of the prison authorities
during her visit. She comments: “Of course, I very much want to think that this
was an accident, but the specialists think differently. Who knows? Maybe they
have moved from (threatening) words to action!”.

Campaign
Kazakhstan backs the protest made by Vadim to the head of the prison security,
Zhomart Aitbaev, at the attempts made to discredit and harass his partner
Ekaterina Kuramshina. We demand from the prison authorities in Kazakhstan to
cease this brutal treatment of this innocent person. We also demand that Vadim
Kuramshin is provided with the medical assistance he requires.

This
Aitbaev is the same security chief who, on 1st November 2013, organised for
thugs from the prison’s so called «press hut” to make a sexual attack on Vadim.
This led Vadim to cut the veins in his wrist in protest. Notwithstanding
international protests, Aitbaev, far from being censured, has since then been
promoted.

Campaign
Kazakhstan calls for letters to be sent to the authorities demanding a full
investigation of the circumstances surrounding the recent beating of Vadim. As
his lawyer, Dmitrii Baranov, explains: “Even before this attack, Vadim was
concerned that something of this sort would happen, or that he would face
provocations from his ‘cell-mate’ trying to create a conflict”. He had reported
that the other person sharing the cell with him is constantly trying to create
an argument. Vadim assured his lawyer that he would do all in his power not to
succumb to such provocations.

Whoever
has ordered these attacks and whoever has carried them out will be discovered.
For now, just a few words from Vadim just after his latest beating: “It’s
evening, I’m just coming to myself, I’m filling my stomach with fortifying tea
and look out of the window where the icy night is already setting in. I sit
down, look out into the dark, turning over the events of the last couple of
days in my mind”.

Campaign
Kazakhstan is demanding that these brutal attacks on Vadim Kuramshin cease,
that those responsible for the attacks are brought to justice. We also support
the demand for Vadim to be transferred from his current prison to a prison
nearer the capital Astana. But we are committed to campaigning for him to be
released altogether and for all charges against him to be dropped. (See
previous articles on this site.)

Please
send letters and protests to the Kazakhstan embassy responsible for your
country (listed here). If you can send a brief letter (in any language) to
Vadim, it can have an effect on the authorities and, when it finally reaches
him, lift his spirits.

To the
authorities in Kazakhstan:

We have
learned with great anger of the treatment of the wrongly imprisoned human
rights lawyer, Vadim Kuramshin, being held at Uchrezhdenie EC 164/4, Gornyi
posiolok (Zhaman Sopka), 150500, Kazakhstan.

We have
long been campaigning for his release and all charges against him to be
dropped. Instead of this happening, we have received reports of brutal beatings
and intimidations that are badly affecting his physical and psychological
condition.

We
demand that all such cruel treatment cease, that Vadim be moved immediately to
be nearer to his loved ones, that they themselves do not become the victims of
extra-judicial violence. We are calling for a an immediate review of his case
to not only give him back his freedom but clear his name and agree compensation
from the authorities who have wronged him so callously.

We
believe the vile treatment of Vadim Kuramshin is one illustration of the brutal
suppression of all political and democratic rights in Kazakhstan. We will
continue to campaign for social justice and an end to the Nazarbaev
dictatorship in Kazakhstan – a regime supported by British and other
governments in the interests of greed and profit.