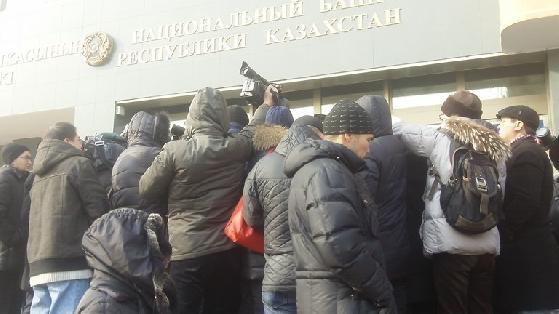 Protesters in ’s commercial capital, Almaty, forced their way into the National Bank on February 12 to confront the country’s top financial officials over the sudden devaluation of the tenge, which wiped a fifth off the value of the currency in one fell swoop the previous day.

A group of around 50 people – including low-paid workers, worried mortgage holders, and pensioners – gathered outside the bank in freezing temperatures, demanding a meeting with National Bank chief Kayrat Kelimbetov to address concerns about spiraling inflation that analysts say is certain to result from the devaluation.

“What are the people to do? How should they act in this situation? What is the way out? We want to know this!” Zhasaral Kuanyshalin, a prominent activist who was taking part in the protest, told EurasiaNet.org.

Police stood by as irate protesters barged into the National Bank’s lobby. Riot police reinforcements were summoned, but management moved to deflate tension by inviting the demonstrators inside.

At a turbulent meeting with National Bank Deputy Chairman Kuat Kozhakmetov, Kanagat Takeyeva, a designated spokeswoman for the protesters, put forward demands ranging from a meeting with Kelimbetov (who is in Astana, the capital) to jobs and tackling the rising cost of housing and mortgages.

Kozhakmetov’s explanations that the government had pledged to rein in inflation (which is inevitable as the price of hard currency-denominated imports rockets in the wake of the devaluation) were met with cries of “Lies, lies!” “Why do you deceive us?” and “Kelimbetov, resign!” The meeting broke up inconclusively, with Kozhakmetov promising to consider the demands.

As Kelimbetov bears the brunt of public anger, observers note that Nazarbayev is conspicuously absent, in enjoying the Winter Olympics (he is due back by February 14 to address a cabinet meeting).

“It’s unbefitting when the head of state – who’s responsible for everything, and should be responsible – keeps quiet,” said Kuanyshalin, the activist. “It should be the words of the president, and we’re not hearing him. And that’s sad.”

The way officials handled this protest, unlike others, suggests they are treading cautiously.

Shortly afterward a mini-protest on a separate issue began at Almaty city hall, where two protesters demanded the resignation of Mayor Akhmetzhan Yesimov over his running of the city, following the breakdown of a major heating pipeline this week which left some homes freezing.

An official emerged to explain that those protestors were breaking Kazakhstan’s public protest laws requiring them to request permission to rally 10 days in advance, prompting protester Zhanna Baytelova (who was once jailed for throwing manure at a court) to propose that city hall should in future give 10 days’ notice of breakdowns in public services. The demonstration ended without incident.

Public protest is unusual in , but this was the fourth protest in Almaty within a week. On February 5 three bloggers were jailed for 10 days for protesting over being barred from a meeting with Yesimov; three days later a fourth, Dina Baidildayeva, was arrested for a one-woman protest over their imprisonment. Her trial has twice been delayed and is now scheduled for February 17.