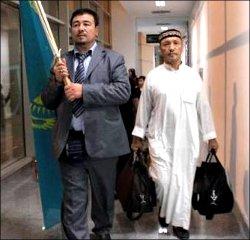 Kazakstan’s government is scaling down a programme designed to encourage diaspora Kazaks to return by offering them generous benefits, and it is replacing this with more pragmatic legislation.

Since independence in 1991, the government has pursued a policy of encouraging ethnic Kazaks from other countries to come back and take up permanent residence.

Many thousands of Kazaks fled to , and other countries in the late 1920s and 1930s as the Soviet policy of “collectivising” farming wrought havoc on their traditional pastoral way of life. Others lived in and , and found themselves citizens of those states after 1991.

Apart from righting the wrongs done by Stalin, the government also wanted to increase the numbers of Kazaks, who in 1991 were in the a minority.

Some 700,000 descendants of emigrant populations have returned since independence. With an outflow of other groups like Russians, ethnic Kazaks now make up 63 per cent of the population, according to the most recent census in 2009.

The returning Kazaks, known as “oralmans”, were previously eligible for financial support from the government, including one-off payments towards costs such as transport and housing. They could also get a Kazakstan passport within three months of applying.

Now an immigration law defining the terms under which foreigners can enter and stay in Kazakstan is going to affect diaspora members seeking to become residents.

The oralman programme was suspended in 2011, and officials say the new law will simplify registration and tax collection as well as helping ensure that there are not more migrants than the job market can easily absorb.

Returning Kazaks will now have to wait at least four years before they can apply for citizenship, and loans will replace government grants.

Opponents of the new legislation say it will lead to a drop in the number of oralmans, and accuse the government of failing to live up to its pledge to welcome them with open arms.

Ibrahim Koshkari, chairman of the Kazaktanu Heritage Foundation, criticised the law, accusing it of equating returnees with labour immigrants. This was “absolutely wrong”, he added.

Kairat Baitolla-Uly, leader of the Otandas-El group which represents the interests of oralmans, said the law was “a complete reversal of the immigration policy started by Kazak president Nursultan Nazarbaev over 22 years ago” and accused the government of “sidelining the interests of the Kazak nation”.

Baitolla-Uly himself received citizenship in 2002, four years after moving from from the Xinjiang region of north-western .

He says the greatest concern is not the withdrawal of financial assistance – which in any case involves a cumbersome bureaucratic process – but the restriction on gaining citizenship.

“They won’t be allowed to own land to farm or grow fruit and vegetables,” he said. “They won’t be able to apply for public-sector jobs, and they’ll find it hard to get permanent work in the private sector.”

Officials say that instead, oralmans will be offered plots of land which they can farm free of charge until they receive citizenship, which will then allow them to purchase property.

Kalijan Shongarbaev, deputy head of the interior ministry’s department for the southern Jambyl region, insisted that returning Kazaks would not be treated like labour migrants.

They will not need to provide proof of financial solvency when while applying for permanent residence, and when they apply for citizenship after four years, the process will be simplified and they can get a passport within three months, with no fee charged, whereas an application by a foreign national needs approval from the president.

Shongarbaev also denied that the new legislation would reduce the numbers returning.

“In our view, the number of oralmans coming to Kazakstan is not going down; on the contrary, it’s growing and it will continue to do so. Compared with other countries in , living standards in Kazakstan are higher and the economy is stronger and more dynamic,” Shongarbaev said.

Analysts say that, in the past, the authorities prioritised the goal of increasing the proportion of ethnic Kazaks as a political ideal that outweighed the economic costs of absorbing high numbers of new citizens.

New arrivals from countries like , , , , and – outside the Russian-speaking lands of the former – found the language barrier an obstacle to integration. Others found it a struggle to find work.

This situation has not been helped by corruption and the misappropriation of public funds.

According to Almaty-based political analyst Zamir Karajanov, a 2012 parliamentary audit criticised the implementation of the government programme.

The authorities have also convicted officials who claimed oralman status on behalf of people who were actually dead and pocketed the financial benefits themselves.

“The government is trying to shift the burden of responsibility from its own shoulders onto the repatriates themselves,” Karajanov said, although he noted that the end of grants for oralmans was part of a general trend of reduced public funding.

“Previously, the government did the same in relation to pensioners. They lost their benefits in return for a small increase in their pensions. The same approach is being applied to immigration,” Karajanov said.

Years of government support have raised the expectations of returning Kazaks, who complain that the new legislation combined with negative public perceptions makes them feel unwanted.

Yevgeni Zhovtis, founder of the Kazakstan Bureau for Human Rights and Rule of Law, agreed that the move was primarily a cost- cutting exercise but argued that the authorities had failed to properly address the problems faced by oralmans.

For the government, he said, it was a political project, but it created social problems for the returning Kazaks, and placed an added burden on the national budget. “That in turn meant that regional authorities experienced the same budgetary pressure problems, which clearly created resentment among the local population,” he added.

Officials have contributed to negative attitudes towards the recently-arrived Kazaks. Koshkari cited the example of one member of the government’s migration committee who referred to oralmans as “uneducated people”.

Koshkari also noted that after the December 2011 violence in the oil town of , western Kazakstan, President Nazarbaev said that oralmans living in the area contributed to the tensions. Months of a labour dispute by oil workers for better pay culminated in a confrontation in which police officers fired at demonstrators, killing 14 people.

Karajanov said the oralman issue needed to be seen in the wider context of the social changes had been undergoing since independence. In an atmosphere of competition for jobs and resources, any group regarded as “outsiders” would face mistrust.

“In reality, there are a lot of similar social phobias. They don’t only apply to the oralmans. For example, city-dwellers are known to dislike people who’ve moved into urban centres from the countryside,” he said.