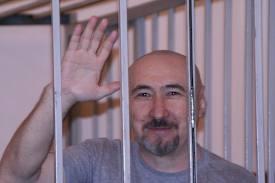 Jailed Kazakh dissident Aron Atabek, whose whereabouts were unknown for several weeks, has been located in his old penal colony in the central Qaraghandy region.

Atabek’s son said that his father has been returned to the labor camp in the town of from a tougher prison in the northern Qostanai region. ‘s Bureau for Human Rights said the Qostanai Prosecutor’s Office had annulled last year’s decision by the to transfer Atabek to a harsher prison for two years for his refusal to follow penitentiary regulations.

Atabek, 60, who is a poet, was sentenced to 18 years in jail in 2007 for his role in organizing mass protests that resulted in the death of a police officer.

Atabek has maintained his innocence and rejected a government pardon if he would admit his guilt.