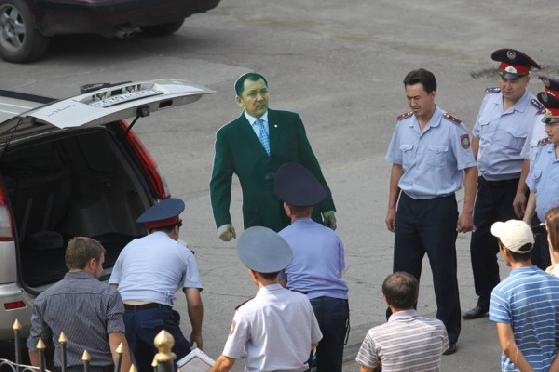 On August 16, 2013 Specialized Court of Uralsk has considered a case on commitment of administrative offence under article 357 «Arbitrariness» of Code of Administrative Offences of the with regard to Talgat Umarov.

According to judgment, Talgat Umarov was punished by fine up to two monthly assessment indices for illegal usage of picture of Oblast Akim (Governor) Nurlan Nogayev during conduction of public arrangement. The rest participants of public arrangement Turar Tulegenov, Raul Uporov and Michael Ishutin should write explanatory notes and they confined themselves to common conversation.

The representative of Talgat Umarov, human rights activist Paul Kochetkov stated, that there was an official document (in particular, this official document has not been there, the day before), when he studied documents of the case. In letter which was signed by Akim (Governor) of West Kazakhstan Oblast Nurlan Nogayev, addressed to Chairman of Specialized Administrative Court of Uralsk and Head of Department of Internal Affairs of Uralsk had the following: On August 13, 2013 I knew, that unknown persons carried life-size cardboard cutout road with my picture on streets on a car and molested to street walkers with inadequate request to ask different questions. For such public arrangement, related to usage of my photo, I did not give any consent; I think that above mentioned unknown persons have done moral harm to me and my right to picture was violated, in accordance with article 145″The Right to Own Picture” of Civil Code of the Republic of Kazakhstan.

In connection with the above matter, I ask you to institute above mentioned persons to responsibility, in accordance with existing legislation of the “.

The interesting fact: this letter was written on blank of the First Deputy for Oblast Akim; Nurlan Nogayev has been on leave from August 15, 2013.

Correspondents of the newspaper «Uralskaya Nedelya» noted that judge Sarieva has prohibited to make a photo, video record and dictaphone record of lawsuit.