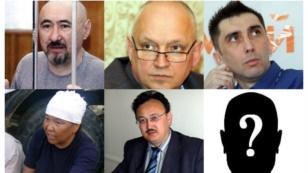 A group of representatives of Kazakh human rights and civic organisations produced the first list of persons considered to be political prisoners in . They drew up the document, using the criteria developed by Kazakh experts on the basis of similar criteria to those prepared by the international non-governmental organisation ‘Amnesty International’ and the Parliamentary Assembly Council of Europe (PACE), according to which the individuals being held captive have been declared prisoners of conscience and political prisoners on an international level.

RozaTuletayeva – sentenced to 5 years’ imprisonment in 2012.

MaksatDosmagambetov – sentenced to 6 years’ imprisonment in 2012.

Aaron Atabek, a poet, a singer, a renowned Kazakh civic activist, a dissident. Known since 1991 for his critical statements made against the government. On 14 July, 2006, approximately 1 thousand police officers tried to storm the Shanyrak district in order to destroy 155 houses (squatter settlements). In the conflict between regional migrants, defending their homes, and the police, a police officer suffered fatal burns. On 17 July, 2006, Aaron Atabek was summoned for questioning as a witness, but he was not released from the building of the Chief Directorate of Internal Affairs. Aaron Atabek’s involvement inthedeathof the police officer was notproven, however, hewas subsequently recognisedastheorganiserof theriotsandsentencedto 18 yearsinprison.

Vladimir Kozlov – the leader of the opposition party ‘Alga’. In 2011, oil workers in the west of were on strike for 7 months. During that time, civil society organisations and political parties, including ‘Alga’ with its leader Vladimir Kozlov spoke in defence of the rights of protesters and disseminated information about the developments to a wider local and international public. On 16-17 December, Zhanaozen and Shetpe, police used their weapons against the demonstrators. The dispute between oil workers and employers ended in tragedy, as, according to official information, 17 were killed and over 100 were wounded. After the massacre, on 8 October, 2012, Vladimir Kozlov was convicted by a court in Aktau on charges of inciting social discord, calling for a violent change of the constitutional order and the establishment of an organised criminal group and sentenced for 7.5 years in prison.

RozaTuletayeva – human rights activist, was actively engaged in the defence of the rights of oil workers who had gone on strike in western in 2011, protesting against unfair working conditions. “When we started to protest, we did not think that the movement would grow so big. But we were determined; we could not allow the company to continue to exploit us” (RozaTuletayeva). RozaTuletayeva stated in court that during the investigation, she along with other oil workers, had been subjected to torture. The court ignored her complaints. She was sentenced to 5 years in prison.

Maksat Dosmagambetov – is one of the leaders of oil workers; during the strike, he represented the strikers in , speaking at a rally about the strike, the demands that had been put forward and the government’s inaction. It was Maksat whom the strikers chose to represent them during the negotiations with the government. MaksatDosmagambetov was one of the first who went on hunger strike. During his detention, he was subjected to torture: “On 20 December I was interrogated; investigators threatened me, squeezing my ears with a stapler, I was constantly beaten”. Maksat Dosmagambetov underwent a medical examination and was presented with its results proving the presence of injuries (2 broken ribs as well as other injuries). He was accused of organisingthe participation of young people in support of the striking oil workers on 16 December. He was sentenced to 6 years in prison.

Vadim Kuramshin – a civil rights activist, who defended the rights of prisoners and made public  instances of ill-treatment and torture of prisoners carried out by prison staff and police officers,collected and disseminated information on corruption and extortion in prisons, police forces, national security bodies and the prosecutor’s office with some of the information causing a serious public outcry. Hearings in the case of Vadim Kuramshin were conducted under numerous violations, including those involving a court-appointed attorney, who did not have the trust of Kuramshin. In August 2012, he was released from custody having been acquitted in his criminal case by a jury; however, after his public speech at a Supplementary Public Dimension Meeting of the OSCE in he was rearrested, and the jury’s verdict was overturned. Hewassentencedto 12 years in prison.

Aleksandr Kharlamov – a journalist, the head of the human rights centre ‘Secret Service’. Atheistic articles on the journalist’s blog served as a reason for his arrest, as the police qualified them as bearing signs of incitement to religious hatred. The decision of the investigator reads: “Over a period of time, undetermined by the prosecution, A.M. Kharlamov, having studied world religions, such as Christianity, Islam, Judaism and Buddhism, has given his own interpretation of religious systems.” Over many years, Aleksandr Kharlamov published his articles in two local newspapers: ‘Ridderskiy Vestnik’ and ‘Flash!’; shedding light on human rights violations and corruption in local government. Recently, Kharlamov has been found sane on the basis of forced psychological and psychiatric examinations and is currently in custody, awaiting trial.

By publishing this list of political prisoners, which is not exhaustive, we call on Amnesty International, Human Rights Watch, FIDH, Front Line Defenders and other reputable human rights organisations to recognise the persons listed as political prisoners on an international level and to hold an international campaign in their defence. We are making our own efforts to free our political prisoners, but still, we believe that international support is a crucial step in the fight for the liberation of political prisoners in . Aleksandr Kharlamov was forced to undergo a compulsory psychiatric examination and is currently awaiting trial, while the other aforementioned persons became victims of show trials which didn’t meet the standards of fairness, objectivity and impartiality, and ended with convictions, illegally sentencing them to long terms of imprisonment.