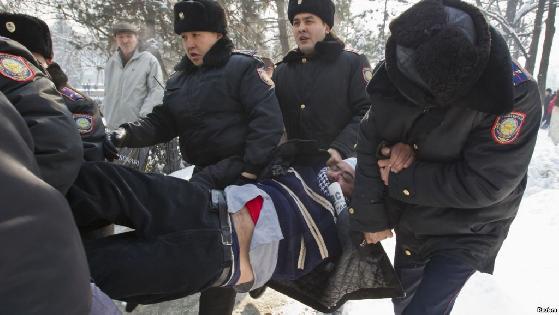 Despite harsh words from the and European Union about Kazakstan’s worsening human rights record, the country’s leaders are unlikely to modify their behaviour, local analysts say. It is a simple equation – placed in the balance against economic and security cooperation with the oil-rich state, human rights count for little.

The US State Department’s annual human rights report issued on April 19 spoke of severe limits “on citizens’ rights to change their government” and “restrictions on freedom of speech, press, assembly, religion, and association” in Kazakstan.

The report dated the crackdown on opposition members and media to the police shootings in the western oil town of in December which 16 people died.

The day before the report came out, the European Parliament passed a resolution expressing concern at the “dramatic worsening” of the human rights situation in Kazakstan. The resolution urged the government to revise a clause in the criminal code that outlaws actions intended to “incite social, ethnic, clan, racial or religious enmity or animosity” – a catch-all offence that rights activists say is being used to silence critics of the government.

The European Parliament report listed issues of concern over the last 12 months including the imprisonment in November of Alga party leader Vladimir Kozlov and the subsequent closure of his party, the jailing of 13 oil workers, the imprisonment of human rights defender Vadim Kuramshin, the arrest of anti-corruption campaigner Alexander Kharlamov, and the introduction of repressive law on national security.

The resolution called for talks on a new Partnership and Cooperation Agreement between the European Union and Kazakstan to be suspended until the country’s human rights record improved.

Similar criticisms of the post-Janaozen environment have been voiced by international rights groups. The New York-based Human Rights Watch also noted that Kazakstan’s human rights record “seriously deteriorated in . In its annual Freedom in the World 2013 report, published in January, the US group Freedom House listed Kazakstan among countries showing “a notable decline” in their human rights record, in this case because of the use of legislation, harassment, licensing regulations, and internet curbs to control the media and limit freedom of expression.

Ludmila Kozlovska of the Open Dialogue Foundation in argues that the European Parliament resolution is its strongest statement to date.

“Whereas Kazakstan used to serve as a model for the region, in every line of this resolution – the third in the last two years – the European Parliament now cites a deterioration in human rights and freedom of expression,” Kozlovska said. “’s message is simple – the West condemns repression and will engage in economic cooperation only if there is progress in liberalising politics.”

At the same time, Kozlovska noted that the resolution was inconsistent with the actions of individual European Union member states, which remained keen to engage with Kazakstan. She pointed to a November 2012 visit to Kazakstan by Catherine Ashton, the EU’s foreign affairs emissary, who failed to raise issues about human rights and political prisoners to the extent that rights groups were expecting.

Kozlov’s wife Alia Turusbekova is still hopeful that European criticism will prompt a response from the Kazak authorities.

“For us, for our family, this is an important document. We hope the Kazak authorities will heed the recommendations set out in the resolution,” she said.

Turusbekova recalled that trade union lawyer Natalia Sokolova, jailed on “incitement to social strife” charges similar to those brought against her husband, was freed in March 2012 shortly after the last resolution from the European Parliament.

In Kazakstan, there is little expectation that strongly-worded criticism even from big players like and will deter the government from doing what it wants, especially when statements are not backed up by sanctions.

Tolgonai Umbetalieva, director of the Central Asia Foundation for Democracy Development, said the government was unresponsive to criticism alone, and all the more so when it “was not vocal and not from the top echelons of power”.

“The Kazak authorities won’t panic or worry about this,” she added.

Amangeldy Shormanbaev, a lawyer, said reports detailing concerns about Kazakstan without any threat of consequences were now routine.

“If this had exerted any influence over the last 20 years, we’d be living in a different country now,” he said. “For such resolutions to work, they have to include sanctions of various kinds. Only then will the intentions of those who pass them get taken seriously.”

Kazakstan’s economic value to the West as an producer of oil and metals and increasingly as a market blunts the effect of tough talk on human rights.

“Irrespective of the violations, EU countries continue to pursue their own economic interests. Over this period [covered by the reports], and have signed numerous advantageous contracts with Kazakstan,” Shormanbaev said.

Because the Kazak authorities are aware of this, any message the European Parliament resolution was meant to send was “ignored”, said Zamir Karajanov, a political analyst in Almaty.

For one thing, he said, neither European not US actors were in good enough economic shape to place human rights values above economic self-interest. For another, western governments fear that pressuring Kazakstan will simply drive it towards and , neither of which cares much about how it deals with human rights.

Karajanov drew a comparison with , which fell out with the after being criticised for mass shootings in Andijan on May 13, 2005.

“This led to the Uzbek government engaging more actively with and returning to the [Moscow-led] Collective Security Treaty Organisation,” he said. “The same thing would happen with Kazakstan. Pressure from the or would result in Astana becoming more involved with these countries. The question is whether the West would want to see or increasing their influence in our region.”

Umbetalieva agrees that increased pressure will not force the Kazak government to mend its ways. She believes this would only happen if officials felt they had tamed domestic opposition and could afford to ease up.

“But given the high level of [social] tensions in the country, the authorities are unlikely to take a softer stance either at the moment or in the foreseeable future,” she added.

Umbetalieva argues that although the criticism is ignored, it has nonetheless been noted by Kazakstan’s leaders.

“Astana talks less about relations with European states these days. The president [Nursultan Nazarbaev] realises that his reputation has suffered as a result of Janaozen,” she said. “Whatever he says, he has to shoulder political responsibility for his own people being shot, even though he’s said he was unaware of it.”