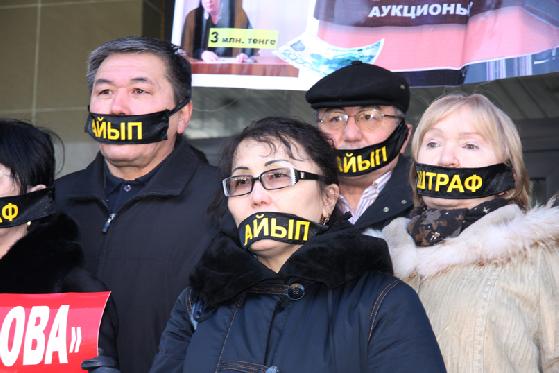 In many ways the Central Asian nation of is much better off than some of its other ex-Soviet neighbours.

It is the richest country in the region, with abundant oil and natural resources. But it is also a country that is conscious of its image.

The government, led by President Nursultan Nazarbayev, knows how it wants the country to be perceived: As a fast developing nation with a bright future.

It does not help that has a repressive political system, a poor human rights record and is intensifying its crackdown on the media.

In the past couple of months, media outlets have been shut down – all of whom had played key roles in covering the 2011 protests by oil workers in the western city of where police gunned down rioting workers. Since those riots, many private media outlets have increasingly earned the tag ‘opposition.’

Options for the independent media are narrowing as courts chase down newspapers and TV channels that refuse to toe the government line. According to the Nazarbayev government, there are nearly 3,000 media outlets operating in and it says it controls only 16 percent of them.

However, according to a study conducted last year by Freedom House, aWashington-based think tank, much of the remaining media, privately owned outlets, are “firmly under the control of major financial groups affiliated with the regime.”

The study calls the media law there “highly restrictive” and says that the law and the penal code “criminalise criticism of the president and leading government figures.”

It seems that as marches into the future, journalists who see anything other than a glittering parade get a taste of its Soviet past.

“Kazakhstan hasn’t used it’s wealth to develop institutions that would take the problems of say workers in the west, in the oil fields, or migrants coming into cities, and bring those into the government and resolve them. And the media is a key part of this, it’s very difficult to resolve people’s grievances if you won’t allow those grievances to be voiced in public, which is what a free media does, it finds problems, it examines them and it brings them to the attention of society and right now the government of Kazakhstan is discouraging that from happening and it’s going to cripple the country’s development.”