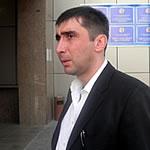 This is a complete travesty of justice. Vadim was originally tried on these charges during a seven month jury trial ending in August last year. Despite being put under huge pressure by the police and regime, the jury found Vadim innocent of all but one minor crime, for which he was sentenced to a one year conditional sentence and released. He was however arrested again in December after the prosecutor appealed the sentence. The new sentence of 12 years was handed down in one day, and has now been confirmed by the appeal judge.

Apart from the clear breaches of procedure during the appeal, the arbitrary rejection of the original jury’s decision, the threats to take disciplinary action against Vadim’s defense solicitors and the removal of the OSCE representative Isham Khanova from her flight to prevent her monitoring the trial demonstrate that the Kazakhstan regime is doing everything to ensure that Vadim’s voice is silenced.

OSCE observer, Isha Khanova, was on her way to Taraz in to monitor the trial of Vadim Kuramshin. However, according to reports, the authorities have taken her off her plane. Her colleagues believe this was done at the request of , in order to prevent international observers from attending the trial of the human rights defender. Fuller details to follow.

This shows that the regime is very conscious of its international image, and protests can have an effect! Please continue to raise awareness of this huge injustice in the movement wherever you are, and continue to send messages of protest to

1:  Embassies of in your country – a list of Kazakh embassies and consulates can be found here http://www.embassypages.com/kazakhstan

For an example of letters others have been sending, see this previous post http://campaignkazakhstan.org/index.php/2013/01/29/vadims-trial-postponed-again/