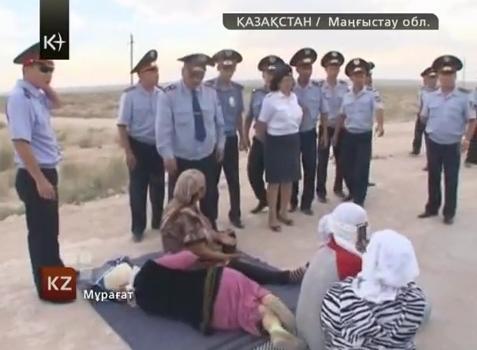 Ayno Daryabaeva, a mother of four from Janaozen in western Kazakstan, does not know how long she can keep her children from knowing their father is in jail.

Her husband Kanat Jusipbaev was among dozens of men arrested after Janaozen was hit by violence on December 16, 2011. Police shot 16 people dead during a demonstration in the town centre after months of protests by striking oil workers.

Although it was police who fired the shots, Jusipbaev and nearly 40 others were accused of participating in mass unrest. At a trial in June, 13 including Jusipbaev were found guilty and sent to prison, while 24 others were released, either found not guilty or suspended sentences. All maintained their innocence.

Daryabaeva said the video footage presented during the trial clearly showed that her husband was not among those in the crowd.

Jusipbaev is now serving a six-year term in a prison in the western Atyrau region.

When he was arrested, his wife was carrying their fourth child, a daughter now eight months old. Her eight-year-old daughter and two sons aged five and six have not seen their father since December 2011.

“I still haven’t told them,” Daryabaeva said, explaining that she had told them their father was working elsewhere. She said it broke her heart when they refused toys and sweets and said, “We want Dad to come home”.

Left to cope without the main family breadwinner, the wives of those convicted are too caught up in the task of daily survival to launch an organised campaign for a judicial review of their husbands’ cases.

They have, however, applied for help from their husbands’ former employer, the Ozenmunaigaz oil company, and also from the municipal government – without success. The first occasion was in September, a month after their husbands were sentenced. They tried again in December, at a commemoration for which the authorities granted permission.

Aynagul Tauarova, whose husband Tanatar Kaliev is serving a four-year sentence, says she is not looking for handouts, just a job that allows her to support the four children she cares for; the eldest lives independently.

She recognises that at least she has a low-paid job as a gas safety inspector, and that many others are in a worse position, with elderly relatives to care for, or no family network to fall back on. She cited the case of Roza Toletaeva, the only woman among the 13 who were convicted, who received the longest prison sentence, seven years. Toletaeva is a widow and her eldest daughter, in her twenties with a child of her own, is caring for her 14-year-old-sister and seven-year-old brother.

Another wife, Shamshirak Nuranova, was offered a job in the municipal government, but it turned out to pay 12,500 tenge a month, just over 80 US dollars, when her apartment costs 30,000 tenge a month to rent. She has a three-year-old child, and her jailed husband Bauyrjan Nepes has appointed her guardian of his two young brothers.

“I have relatives – my parents live in Almaty, and they’re helping out. And there are my husband’s relatives,” Nuranova said. “That’s how we survive, with everyone giving us whatever they can.”

The head of the Janaozen municipal government’s central policy department, Tansylu Jakeshova insisted that the local authorities had established communications with the families of imprisoned residents. She said 12 families had received payments that added up to 4,700 dollars, eight had their mortgages paid for them, and children had been given kindergarten places and school expense subsidies.

“We are currently holding negotiations to find jobs for five of the convicted men’s wives at companies affiliated to Ozenmunaigaz,” Jakeshova said.

Ozenmunaigaz is a local subsidiary of Kazmunaigaz, a corporation in which Kazakstan’s government holds a majority shareholding. Kazmunaigaz’s director of corporate social responsibility and communications, Yerbol Ismailov, told IWPR the firm had made a big effort to contribute more to the town since the tragic events of December 2011. Ozenmunaigaz and another subsidiary, Embamunaigaz, had been restructured to make them joint-stock companies, giving them more autonomy to manage their resources.

“They are giving more to the local [government] budget and allocating more money for social projects,” Ismailov said.

He insisted that the company had no policy of discriminating against relatives of the convicted ex-employees.

“They are not ignored,” he said, adding that they were free to apply for jobs like everyone else. But he warned that with 5,000 jobs applications already sitting in the personnel department, “we cannot make promises”.

After the Janaozen violence, those oil workers still in employment say that working conditions did improve. Some of those who were sacked during the months-long strike were rehired.

“They were given new machinery and new equipment. They are earning good wages,” Daryabaeva said, noting that these workers had not forgotten their imprisoned colleagues, and were helping their relatives out.

Nuranova confirmed this, saying, “The oil workers are giving us money out of their own pockets. They don’t have to do that … We aren’t seeking that amount of help from the authorities.”

Mike Whale, a British trade unionist invited to visit Janaozen by an independent trade union, Odak, highlighted the role women were playing in the aftermath of the violence.

“As far as [Kazak president Nursultan] Nazarbaev is concerned, he wants to whitewash the whole event… almost pretending that this has not happened. But the fact [is] that shooting is still being felt by wives, by families – they lost breadwinners.

After meeting family members of those convicted, Whale said, “Some of the women [are] clearly taking on a prominent role. That was the feeling. The men that I spoke to were demoralised and defeated.”

In December, rumours circulated that the Janaozen convicts might be eligible for release under an amnesty to mark Kazakstan’s independence day. However, this did not happen.

Galym Ageleuov, head of the human rights group , explained that release under amnesty was subject to an admission of guilt and remorse – something this group of prisoners was unlikely to make.

In addition, he said, it was convenient to keep them behind bars since this supported the official narrative that it was unruly protesters, not armed police, who were fundamentally to blame. “They can’t release them. That would mean it was their own fault,” he said.

At a court hearing on January 16, nine of the 13 had their appeals turned down. They included Jusipbaev, Kaliev and Nepes.

Many of the wives believe their husbands have been made scapegoats for acts of violence they did not commit, when all they were doing was striking for better conditions.

“They didn’t kill anyone,” Tauarova said.

Because of the cost of travelling to the prison, Nuranova first visited her husband on his birthday in November.

“I can’t say they are in great condition,” she said of the convicts. “My husband still has a scar on his back from when he was in the temporary detention centre.”

Human rights defenders have documented allegations that those detained after the violence were mistreated and assaulted in pretrial detention. (See Police Round Up Men After Janaozen Violence)

Asked about allegations of mistreatment, Jakeshova said this was a question that should be put to the police.

“Unfortunately, we don’t have information on this,” she said. “For our part, we can state that the town authorities have received no complaints about the law-enforcement agencies from relatives of those imprisoned.”

Ageleuov claimed that offers of jobs and other forms of assistance come with strings attached – the recipients are expected to stop calling for their relatives’ release.