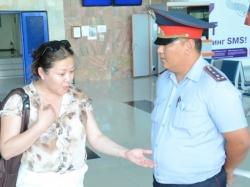 A rights defender who has filed lawsuits on behalf of the citizens claiming police abuse during last year’s unrest in the western town of has been sentenced to 12 days in jail.

Asel Nurghazieva was detained in the western city of on December 6.

Her lawyer told journalists that Nurghazieva was tried the same day and found guilty of hooliganism and resisting arrest.

The lawyer says her client’s arrest and sentencing are politically motivated. That will keep her in jail just long enough to ensure she does not participate in any mischef on the anniversary of the bloodshed, December 16.

In December 2011, police shot dead at least 16 people and dozens more were wounded in the clashes at the end of a seven-month strike by oil workers.

Some of her clients say authorities put Nurghazieva behind bars to prevent possible public protests on December 16, the first anniversary of the Zhanaozen bloodshed.