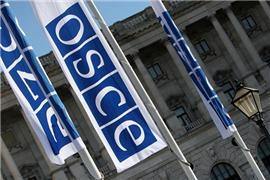 Statement for the Reinforced Permanent Council Meeting – Looking to

The commends the leadership of the Irish Chairmanship in setting a creative and constructive agenda for our work over the past year. We would like to thank Ambassador Cogan and Ambassador O’Leary for their efforts to find common ground, to advance solutions, and to pave the way for a successful Dublin Ministerial.

The is deeply committed to the principles contained in the Helsinki Final Act and other OSCE documents. We value the OSCE’s comprehensive concept of security and its multi-dimensional approach, which makes the OSCE an essential element of the region’s security architecture. Above all, we continue to support the principle enshrined in the Helsinki Final Act, and reaffirmed at the 2010 Astana Summit, that security among states depends upon respect for human rights within states. As we prepare decisions for , we must keep this key principle at the forefront of our consideration.

We believe it is essential that we maintain our focus on issues of principle and concern to people living in the OSCE region and to our partners beyond it: these principles include human dignity and democracy, justice and tolerance, prosperity and peace. These issues, at the core of the OSCE’s comprehensive concept of security, are under threat in the OSCE space. We must strive for a region in which the use of force is unthinkable, human rights and fundamental freedoms are fully respected, and economic and environmental cooperation is the norm. Our goal will be to advance these principles through the Dublin Ministerial and beyond.

Our top priority in will be to focus on ways to strengthen and advance the OSCE’s human dimension. Full implementation of OSCE commitments in this realm is essential to creating a “common security community” in the OSCE region. Human rights and fundamental freedoms are increasingly under attack in a number of participating States (pS). At the Ministerial Council in , agreements to strengthen these commitments, and to strengthen OSCE’s capacity to help states improve their implementation, proved elusive. We are committed to working closely with the Chairmanship and other OSCE pS to see if we can find common ground to advance the human dimension in .

We welcome the Irish Chairmanship’s focus on media freedom. The strongly supports a decision offering protections for the exercise of the freedom of expression, including expression online and for the safety of journalists. We are also proud to be one of 45 OSCE participating States co-sponsoring a declaration recognizing that human rights and fundamental freedoms do not change with new technologies, and reaffirming that participating States will all honor their obligations to respect the exercise of human rights and fundamental freedoms, including their exercise using digital technology. In Dublin, as we did in Vilnius last year, we and our fellow co-sponsors will continue to advocate strongly for adoption of the draft Declaration on Fundamental Freedoms in the Digital Age. The Chairmanship’s draft decision on media freedom, the EU’s draft decision on freedom of peaceful assembly and association, and the Fundamental Freedoms Declaration complement one another, and together they constitute a major contribution to advancing respect for enduring human rights and fundamental freedoms as they are exercised in the 21st century.

The Ministerial Council in 2009 achieved a groundbreaking decision on combating hate crimes. Since that time, successive Chairmanships have dedicated significant effort through Human Dimension meetings and Chairmanship events to focus on tolerance and non-discrimination. The regards as important and timely the Chairmanship’s draft Ministerial Council decision on combating racism and xenophobia, which can incorporate recommendations from these worthwhile past efforts and identify areas of practical work for the future.

In the economic and environmental dimension, the fully supports a Ministerial Council declaration on good governance, and we commend the Chairmanship’s initiative in moving the organization’s work forward in this area. Despite the fact that good governance is at the core of the OSCE’s mission, no single existing OSCE document contains a clear enunciation of its commitment to good governance principles in a cohesive way.

The believes firmly that deepening the OSCE’s commitment to good governance principles and policies will benefit all participating States by encouraging economic growth and stimulating investment in their countries. Strengthening our commitment to good governance, transparency, and the rule of law will help to improve conditions by raising investor confidence, and will also help reduce barriers to trade and promote international commerce. In addition, OSCE leadership in this area can provide a new institutional pillar of support for good governance around the globe.

Moreover, this declaration will serve as a powerful tool for the field missions – whose focus on good governance and the rule of law has intensified in recent years – in assisting participating States to fulfill their commitments.

We welcome the Irish Chairmanship’s leadership in the Security Dimension including its support for traditional OSCE goals such as enhanced military transparency and full implementation of existing commitments, as well as creative efforts to update the Vienna Document at the Dublin Ministerial, the U.S. will underscore the need for progress on the protracted conflicts, a goal I think we all share. With regard to transnational threats, such as organized crime, cyber threats, counternarcotics, and terrorism, there is a shared sense around this table of the common threat, and of the need for the OSCE to act as a forum for discussion and as a platform to engage in joint action. The Permanent Council has already adopted decisions to advance the work of the OSCE in several of these areas. Regrettably, however, it appears that the adoption of a Ministerial Council decision on the OSCE’s efforts to address transnational threats is in jeopardy, due to a lack of progress on the remaining Permanent Council decision on counterterrorism. Furthermore, significant work remains to be done for the adoption of a meaningful package of confidence-building measures for cyberspace and we encourage all delegations to engage constructively. The failure to reach agreement on these decisions would present setbacks to the OSCE’s efforts to address transnational threats.

At Astana our leaders affirmed that civil society plays an invaluable role in monitoring how participating States implement their commitments and provides invaluable ideas for how implementation can be improved. Thus the OSCE must engage with civil society directly. The strongly supports civil society access to and participation in various OSCE meetings and undertakings. In on December 5, NGOs from across the OSCE region will hold an independent parallel event to review developments in the region and to make recommendations to the Ministerial Council. We encourage delegations from all participating States to have a robust engagement with civil society representatives attending these events.

The United States believes that the “Helsinki + exercise could be a useful tool to bring coherence to the work of the three upcoming OSCE Chairmanships, but we must ensure that any decision adopted in Dublin places adequate emphasis on the importance of the OSCE’s human dimension, the implementation of existing commitments and the protracted conflicts.

To address specific areas of focus for the coming year, we would like to emphasize the role that the OSCE can play, in concert with other international organizations, in promoting ’s reintegration into . Programs such as the Community Security Initiative in have produced incremental yet tangible results that warrant the OSCE’s continued support.

In conclusion, Mr. Chairman, we thank you again for your diligent efforts to set the stage for ministerial decisions and declarations. We look forward to working with you and other participating States to ensure a Ministerial Council in that strengthens our common security and core OSCE values.