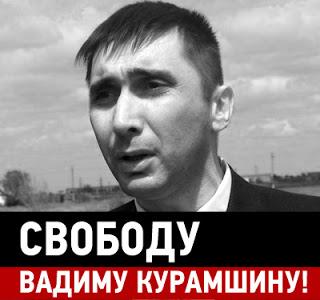 On October 31, police squad burst into house of prominent Human Rights Defender Vadim Kuramshin and arrested him. Vadim is known in for defending inmate rights and exposing footages of police brutality against prisoners. His arrest was based on a decision of ‘s Appeal Panel that canceled the verdict of jury that refused to convict Vadim Kuramshin on charges of fraud and extortion.

Contrary to the demands of court prosecutors to sentence the human rights defender for 14 years in prison, the jury set Vadim Kuramshin free. As soon as Vadim was released, he continued his human rights activities. Within two months, he published a number of video footages from inside the prisons and oral testimonies of prisoners. One of his defendants was a woman prisoner who was subjected to sexual abuse and corporal punishment by prison administration.

Fellow colleagues of Vadim Kuramshin claim that he was severely beaten and as a protest he cut his veins. Neither his lawyer nor his relatives can meet with him in a detention facility. Now, Vadim Kuramshin’s life is in danger. Therefore, I call upon international human rights organizations to condemn his arrest and urge the authorities of for his immediate release.