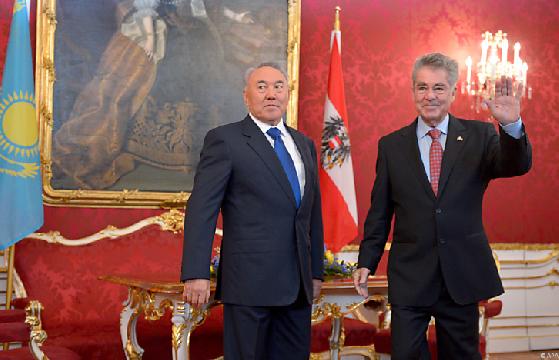 The Austrian President Dr. Heinz Fischer received today Monday 22 October 2012 his counterpart, Nursultan Nazarbayev, president of the , for a two-days visit. is one of the most resource-rich countries in the world. An International roads and transport agreement was signed between the and Austria Governments today. Provisions of the document are aimed at regulating the transit cargo of transportation between and and through their respective territories, as well as cargo transportation to and from the third countries on the basis of permits.

Aside from the official program, the visit of President Nazarbayev to provoked some human rights activists, politicians and Austrians of Kazakh background to protest his presence. A campaign was lunched against the visit and a group of protesters were seen standing near the residence of President Fischer at the Hofburg before the arrival of President Nazarbayev. The protesters called on the two partner countries to address the Schanaosen massacre and to support the call of the UNHCR for an independent international investigation into said massacre.

On the other side of the Hofburg palace, a group of pro-Kazakh demonstrators were rising their country’s blue flag and waiting for the arrival of their president.

The protesters called on the Austrian President and politicians to address the issue of human rights violations in during there meetings. President Nazarbayev leads the central of since the collapse of the in 1991. The protesters believe that there is no light of hope for democratic elections in . President Nazarbayev was accused by international observers of elections fraud and corruption.

Monday, Oct. 22, 2012 – President Nursultan Nazarbayev listens during a press conference after meeting with his Austrian counterpart Heinz Fischer (unseen) at the Hofburg palace in . Nazarbayev is in for a two-day working visit.

In a press conference held with Austrian President Fischer after a closed session, Kazakh President Nazarbayev told journalists that is one of the leading trade partners of . According to him, if in 2009 the volume of cargo transportation between and amounted to three thousand tons, in 2010 it was 4.7 thousand tons and in 2011 the cargo turnover reached about 8 thousand tons. The trade turnover between the two countries reached USD 4 billion in 2011 and thus increased by 50% from the previous period. For the first half of this year it grew by another 56%. Both presidents praised the economic cooperation between and developed since the independence of the Central Asian state in 1991. Nazarbayev thanked President Heinz Fischer for the invitation, saying that the visit is very important and will strengthen the partnership between both countries.

About the internal affairs of his country (obliquely referring to the human rights issues addressed by the protesters outside the Hofburg), President Nazarbayev said that his country was “committed to the democratic and political values of the European Union”. In , according to him, the religions and ethnic groups lived together peacefully. “There is freedom of religion. is a democracy with free elections, there is no censorship of the media” he stated. He added that his country had begun to “build democracy” after the collapse of the in 1991 and was therefore “no exemplary democracy such as the European countries”