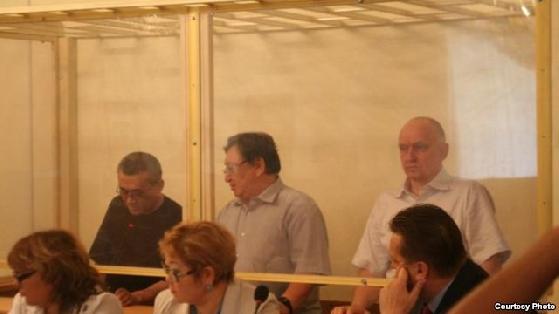 Prosecutor requested a nine-year sentence for Vladimir Kozlov, a Kazakhstan opposition leader, the head of the unregistered opposition party “Alga!”, on charges of incitement of social hatred that led to gross consequences, IA News-Kazakhstan reported.

“I request to find Kozlov guilty and be charged as per the RoK Criminal Code, Article #235, part 1 (‘the establishment of an organized criminal group (OCG), with a purpose of committing one or more offenses’) – for 7 years, as per Article #164, part 3 (‘incitement of social , national or religious hatred that led to gross unrest’) – 9 years, as per Article #170, part 2  (‘calling for the forced overthrow or change of the constitutional order) – for 6 years, in total – for 9 years of imprisonment with confiscation of property” – said the prosecutor at the court proceedings on Monday.

The prosecutor also proposed to keep the decision on their detention unchanged and withhold from the convicted the court expenses.

In January the Prosecutor General Askhat Daulbaev said that one of the reasons of mass unrest in Zhanaozen, where 16 people died and dozens were wounded, were the active steps of individuals who persuaded the laid off workers to continue protests and show severe resistance to the authorities. According to the prosecutor, the content of materials distributed by the activists, the expertise found signs of incitement of social hatred.

On this fact the National Security Committee initiated a criminal proceeding and arrested a number of  leaders and active members of unregistered public associations ‘Alga’ and ‘Halyk Maidany’ Vladimir Kozlov, Akzhanat Aminov and Serik Sapargali accused of involvement in the incitement of social unrest.

The court trial began in mid-August and were held in public, the presiding judge at the trial was Berdibek Myrzabekov.