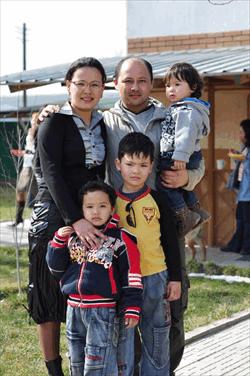 A former Uzbek house church pastor is in a Kazakhstan jail, awaiting a ruling whether he will be returned to his native country, even as Kazakhstan’s Supreme Court considers whether to declare him a refugee from almost-certain persecution.

Makset Djabbarbergenov was arrested Sept. ’s financial center and largest city. wants him back to face charges that he practiced religion outside state regulation.

It’s not the first time Djabbarbergenov, 32 and the father of four – soon to be five – has been detained by authorities who have frowned on his leadership of unregistered Christian communities. But he told a friend he has been shaken by this arrest.

Speaking from his jail cell, Djabbarbergenov told the friend he was too disturbed to eat during the first few days of his incarceration. To shield his identity, Open Doors News is not reporting the name of Djabbarbergenov’s friend. At first, Djabbarbergenov told his friend, he told God he did not want this cross. Now, he said, “I pray that if this is from you, Lord, I will accept whatever you say. Just help me carry it.”

He has carried a cross for more than a decade. Born in in the small town of , Djabbarbergenov became a Christian in 2000 and soon became an active church leader in Nukus, the capital of Karakalpakstan, the autonomous . At present, no Protestant church in Karakalpakstan has an official registration: they are considered illegal.

Djabbarbergenov was hauled into court six times. Police raided the family’s apartment in August 2007, prompting Djabbarbergenov and his wife, Aigul, then pregnant with their third child, to flee to , the Uzbek capital. He crossed into the following month, his family followed a few months later.

Their time since has been spent seeking asylum in . Though the Office of the United Nations High Commissioner for Refugees determined the family to be refugees who would face prosecution in because of their Christian faith, the Kazakh government disagreed and has ruled against Djabbarbergenov at several turns. His case now rests before the country’s highest court, which has yet to set a hearing date.

Even as Djabbarbergenov’s refugee status hangs in the balance, prosecutors have moved ahead in response to ’s request to return him to face charges.

In a detailed account of the lengths to which Kazakh investigators have gone, the Norwegian religious-freedom watchdog agency Forum 18 reported they held his sister-in-law for two weeks in an attempt to flush him out. From her cell phone they obtained the phone number of Djabbarbergenov’s wife, and tracked down the location of the family’s home, where they arrested Djabbarbergenov on Sept. 5 – his youngest son’s 2nd birthday – Forum 18 reported.

The two charges awaiting Djabbarbergenov in each carry a maximum penalty of three years in prison. is ranked No. 7 on the World Watch List of the 50 countries where it is most difficult to be a Christian. “Christians are fined or given short-term prison sentences. When brought to court, fair treatment is not ensured,” according to the World Watch List.

The U.S. State Department and the U.S. Commission on International Religious Freedom have designated as a “country of particular concern.” “The Uzbek government violates the full range of human rights and harshly penalizes individuals for independent religious activity regardless of their religious affiliation,” including Muslims, the Commission declared in its 2012 annual report.