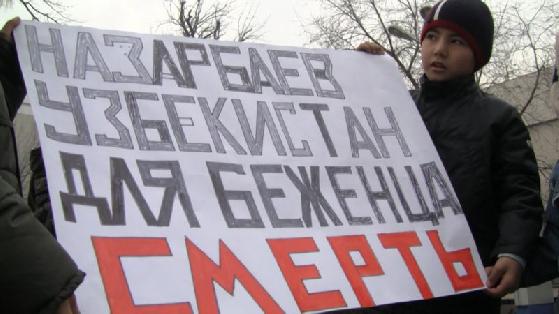 has violated its international human rights commitments by extraditing 29 asylum-seekers to the neighboring authoritarian state of , a U.N. panel says.

The deportees face possible ill-treatment, the Committee against Torture, a panel that monitors implementation of the U.N. Convention Against Torture, said in a ruling made public Wednesday. It urged to seek the return of the deportees and give them compensation.

The ruling was published on the website of the French-based Action by Christians for the Abolition of Torture, which spearheaded the complaint.

had argued that the Uzbek men, who include two Tajik nationals, were members of a terrorist group that posed a threat to the region and were expelled last year.

also said it was abiding by an international extradition agreement with fellow Central Asian nation by handing over the asylum-seekers. It also said had given assurances that the men’s rights and freedoms would be respected.

Most of the men have since been sentenced and jailed on charges including membership in banned Islamist groups and planning to overthrow the government.

The UN has previously noted that cruel and inhuman treatment by police and investigative officials is routine in . The New York-based Human Rights Watch says Uzbek methods of ill-treatment have included electric shock, beatings, rape, asphyxiation and psychological abuse.

Rights activists say is conducting a relentless campaign of intimidation against Muslims whose beliefs have not been endorsed by the state.

Religious freedoms were harshly repressed by atheist Soviet authorities, but after the Soviet Union fell in revival of Islamic belief emerged across much of .

saw a flourishing of strict strains of the religion that President Islam Karimov’s government argues represent a grave threat.