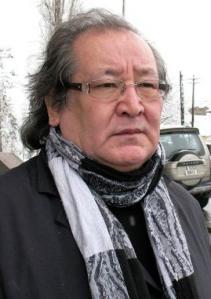 Prominent theatre director Bolat Atabaev, who has spoken out on behalf of striking oil workers in , has been put on trial on trumped up charges. He is a prisoner of conscience, detained solely for exercising his right to freedom of expression.

Bolat Atabaev, a prominent cultural and public figure in , has been speaking out since mid-2011 on behalf of striking workers in the south-west of the country. He visited striking workers in the oil city of and has tried to draw the authorities’ attention to the workers’ demands, which include calls for the authorities and employers to recognise the right of independent trade unions and ensure that salaries and working conditions meet international labour standards. He protested publicly against the security forces’ use of lethal force against striking workers, protesters and unarmed citizens during violent clashes in Zhanaozen in December 2011.

The charges against Bolat Atabaev were lodged by the Committee for National Security (Komitet Nationalnoi Bezopasnosti, KNB) on 6 January 2012 under article 164 (“inciting social discord”) of the country’s Criminal Code. He was released on bail and ordered not to leave the southern city of , where he lives. On 14 June that city’s Almalinski regional court sanctioned his arrest on the grounds that Bolat Atabaev had broken some of his bail conditions: he had refused to present himself for interrogation by the KNB or travel to Aktau, over from Almaty, to go on trial. He was arrested on 15 June by KNB officers as he was leaving his home. Bolat Atabaev has explained that he refused to go for interrogation so as to protest against the charges brought against him and to highlight the injustice of the government’s treatment of protesters and striking workers in Zhanaozen.

He was put in a convoy on 16 or 17 June to travel by road to a pre-trial detention centre in Aktau. This journey can take up to 10 days. He has diabetes, for which he needs regular medication. It is not clear whether he was allowed to take this medication with him, or whether the security officers have taken any for him.

Please write immediately in Kazakh, Russian or your own language:

n      Calling on the authorities to release Bolat Atabaev immediately and unconditionally;

n      Urge them to ensure that Bolat Atabaev receives any medical attention he may require;

n      Urge them to guarantee the right to freedom of expression in line with their international human rights obligations, including Article 19 of the International Covenant of Civil and Political Rights.

PLEASE SEND APPEALS BEFORE 2 AUGUST 2012 TO:

House of Ministries Entrance No.2

Chairmen of the KNB

** Fax numbers may not work outside office hours, GMT+5 **

Thousands of oil industry workers in Mangistau Region in south-western began a series of strikes and public protests in May 2011, following disputes over pay and working conditions. The companies took legal action: the strikes were declared illegal and hundreds of striking employees were dismissed.

The authorities used excessive force to break up the protests and arrested dozens of striking workers as well as trade union and opposition political party activists. Most were sentenced to short terms of administrative detention, or fined. The security forces also threatened, detained and beat relatives and supporters of the striking workers and harassed human rights monitors. Independent journalists covering the strike were assaulted by men in civilian clothes in October 2011. The authorities’ failure to investigate such violations added to the workers’ grievances and increased tension.

On 16 December, in the worst confrontation in recent Kazakhstani history, celebrations of the 20th anniversary of ’s independence in Zhanaozen were marred by violent clashes between protesters and police. At least 15 people were killed and more than 100 seriously injured. Eyewitnesses claimed that some police had fired warning shots in the air, but others had fired directly into the large crowd in the square, which included women and children.. Amateur video footage showed the security forces aiming and firing at protesters running away, and beating those lying injured on the ground. The president imposed a 20-day state of emergency in Zhanaozen, sent in military reinforcements and set up a special commission to investigate the violence. All communications with the town were cut off. The president, who visited the city on 22 December, blamed the violence on “young hooligans” who had taken advantage of the dissatisfaction and anger of the striking workers to destroy and loot public and private property. He said the security forces had acted strictly within the law. However, the Prosecutor General’s Office opened a criminal investigation into the the security forces’ actions, after video footage of the events was released. Following a visit to Zhanaozen on 22 December, the president dismissed senior national and regional oil and gas company executives as well as  the regional governor for failing to adequately address the demands of the striking oil workers.

The Prosecutor General’s Office announced that 16 people had been arrested, charged with organizing the violence while over 130 had been detained for taking part in violent mass disorder. In the days following the violence, released detainees and relatives of detainees reported that scores of people, including young women, had been rounded up and kept incommunicado in overcrowded police cells. They claimed the detainees had been stripped naked, beaten, kicked and doused with cold water. Journalists reported hearing screams coming from interrogation rooms in police stations. Independent monitors were allowed no access, so found it difficult to confirm this. At least one man was alleged to have died as a result of torture in police custody.

The main trial, of 37 people, all accused of organizing or taking part in the violence, started at the end of March 2012. Most of them recanted their confessions in court, saying they had been made under duress. Some of them gave very detailed and graphic descriptions of the torture and other ill-treatment they had suffered in detention and some identified police and security officers they said were responsible. The police and security officers, accused by the defendants and their lawyers of opening fire at the demonstrators and ill-treating them in detention, testified in court as victims or witnesses, some of them anonymously. All pleaded self-defence; when asked who had given the order to open fire, some said they had not been ordered to open fire, but had not been ordered not to open fire either. The Prosecutor General’s Office reviewed the allegations of torture at the request of the presiding judge but rejected the claims. Seven of the defendants were sentenced to prison terms of up to seven years.