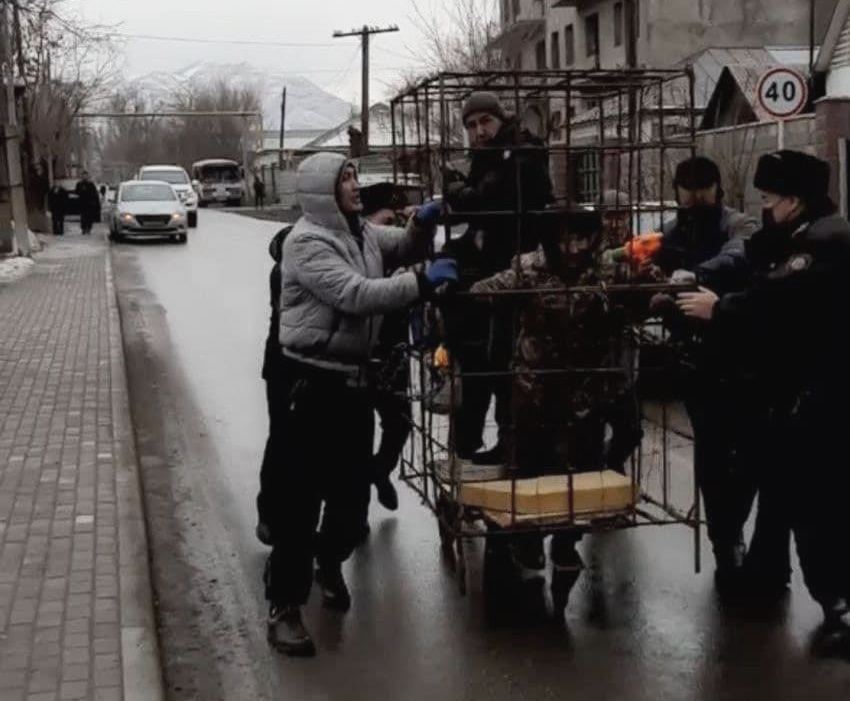 One activist (Yerkin Kaziev) was already in pretrial detention for a political art performance a year ago – now, a second participant (Aidar Mubarakov) has also been detained.

A year after the January 2022 protests, they are still not history. Persecution of participants continues, while new criminal cases are being opened. One of these cases is against the Aidar Mubarakov, one of 7 activists who on January 4th, 2022, staged an art performance in Kaskelen in support of those detained after protesting the increase in price of LPG in Zhanaozen two days earlier.

In the performance, protestors chained themselves to a wheeled cage. 2 people were inside the cage, and 5 others pushed it towards the local Akimat (local government office). The protestors were stopped by police, who cut the chains and used tear gas – allegedly in response to the face that Yerkin Kaziev and Aidar Mubarakov were firing water pistols at the police.

Kaziev, with others, was under administrative arrest for this art performance when riots broke out in Almaty. Police released those arrested and told them to go to the square in Almaty. Subsequently, a criminal case was opened against Kaziev on suspicion of participation in the riot. After no evidence was found, Kaziev was then placed under arrest on charges of attempted murder of a police officer (for use of the water pistol) in October. He is also accused of involvement with the opposition movement Democratic Choice of Kazakhstan, which has been labeled an extremist organization.

Just before the new year, another case was brought against Aidar Mubarakov.

We will follow the course of this case, believing that the best outcome would be for the case to be thrown out due to the far-fetched nature of the charges and political motivation.