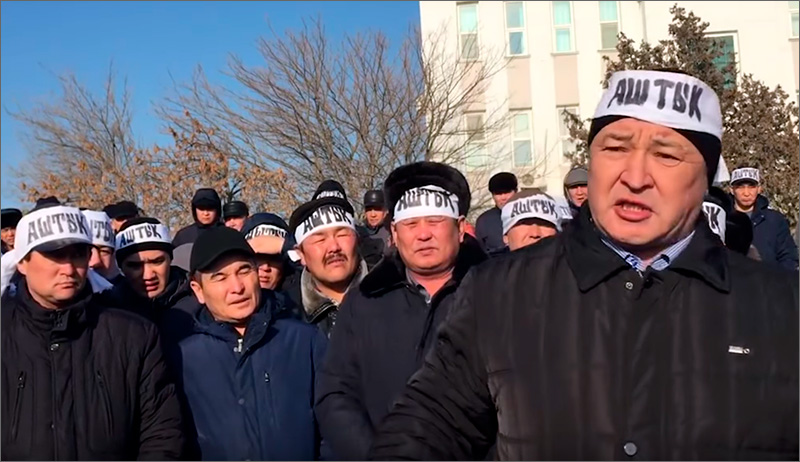 Hunger strike the employees of Oil Construction Company (OCC) announced in Aktau, who have been refusing food and demanding the registration of the Confederation of Independent Trade Unions of Kazakhstan, was put to an end by police on January 22, 2016.

Participants of the hunger strike in Aktau, wearing headbands with the word “hunger.”

Earlier on January 18, court in Aktau ruled the strike was illegal and therefore had to be stopped. The next day, Aktau police apprehended Amin Yeleusinov, chairman of the OCC workers’ trade union, and took him away.

Police then visited the building of said trade union, wherein the members were holding hunger strike, and apprehended Nurbek Kushakbayev, one of the leaders. Reports emerged later that Almaty District Court issued a warrant for their arrest on January 21.

Police wrote down the names of all employees at the company who were present in the building at the time, of whom 15 appeared by court the same evening; the court imposed fines equal to 20-50 monthly wage norms (a monthly wage norm equals USD7) for “violating the rules of organising and holding peaceful rallies.”

Journalists were not allowed at the hearing. However, according to one of the convicts, a reporter from an unidentified publication was found present in the courtroom nonetheless. Therefore, due to this alleged reporter’s presence, the defendants were led out of the courtroom and bussed to the outskirts of the city, and the hearing resumed only after the journalist left the courtroom and lasted until late in the evening.

Background: 11 protest members have already been held administratively liable based on the aforementioned article. Hearings into the case of hunger strikers continued in Aktau early on January 23. Another 28 individuals are on the defendants’ bench. Apparently the authorities want to punish every participant of the protest, which was held in full accordance with pertinent laws.

The arrest of the leaders is a cause of great concern. According to the Almaty-based lawyer Gulnara Juaspayev, Mr Yeleusinov is charged with Article 189 (Appropriation or embezzlement of entrusted property) of the Crime Code of Kazakhstan; he is also charged with resisting police. Mr Kushakbayev is charged with Article 402 (Participation in an illegal strike) even though no protest strike was discussed.

The lawyer stated she was unable to meet her clients for two days and she could not get [presumably: copies of] their arrest warrants. According to her, officers at the internal affairs directorate of Mangistau Region would not tell her where Messrs Yeleusinov and Kushakbayev are at this time nor would they show copies of arrest protocols. It was learnt only on January 22 that the arrested trade union leaders were taken to Astana.

Meanwhile, despite the fact those on hunger strike were protesting during their off-duty hours, Oil Construction Company under the leadership of ex-minister of labour and social security, Serik Abdenov, issued a demand strike participants repay financial damages in the amount of 64,267,824 tenges (nearly USD200,000). Lawyer Juaspayeva confirmed the claim.

On January 21, Aktau City Prosecutor Marat Toyjan said the ministry of internal affairs in investigating the case of trade union leaders. According to Mr Toyjan, the protest is “aimed at the government.”

In the evening of January 22, KTK Channel aired a weekly show, where the arrested trade union leaders were portrayed as criminals that have “not only robbed oilmen” but also attempted to shake the stability to benefit third parties who are in the West, judging by statements and claims aired. 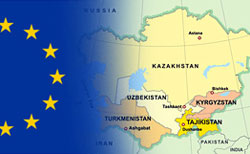