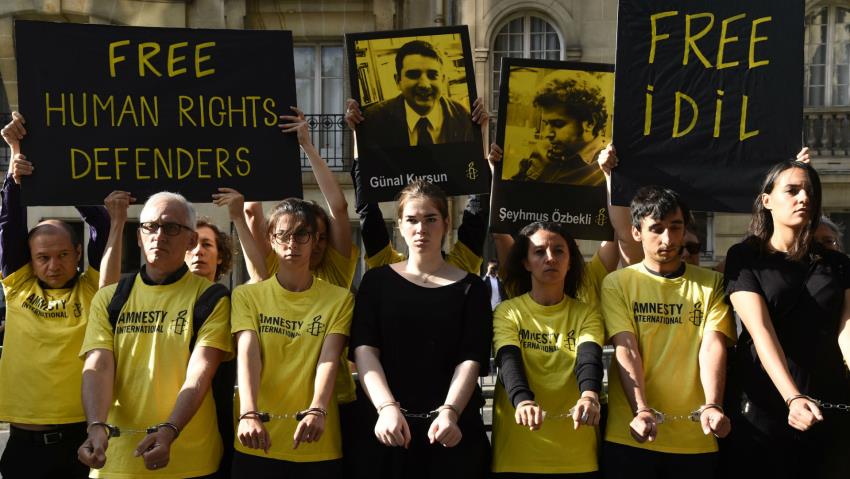 On 5 July 2017, ten human rights defenders were taken into custody while attending a digital security training organised on Büyükada Island off the coast of Istanbul, Turkey. This so-called ‘Istanbul 10’ trial will have its final hearing on 19 February 2020 and could serve as a precedent for further upcoming trials against civil society organisations.

The defendants consist of eight representatives of civil society organisations in Turkey and two non-Turkish trainers. Those taken into custody were not given access to legal counsel for more than a day. While two defendants were released on probation after twelve days in jail, the remaining eight defendants were subsequently detained for 113 days. Despite being in jail at the time of the training, the case of Mr. Taner Kılıç—a lawyer, former Director, and now, honorary president of Amnesty Turkey, was merged with that of the ‘Istanbul 10,’ based merely on his ‘close contact’ with one of the ‘Istanbul 10’ detainee—a fellow colleague at Amnesty Turkey. He was only released from pre-trial detention after fourteen months in jail.

At the most recent hearing of the ‘Istanbul 10’ on 27 November 2019, the Prosecutor requested acquittals for five defendants (including the two non-Turkish trainers) and imprisonment for up to fifteen years for six of the defendants. Mr Taner Kılıç was accused of ‘membership of a terrorist organisation,’ while Mr. Nejat Taştan (Association for Monitoring Equal Rights), Mr. Günal Kurşun (Lawyer and Human Rights Agenda Association), Ms. İdil Eser (Amnesty Turkey), Ms. Özlem Dalkıran (Helsinki Citizens’ Assembly) and Mr. Veli Acu (Human Rights Agenda Association) were accused of ‘aiding and abetting a terrorist organisation without being a member thereof.’ The defendants are also accused of abetting terrorists through their organisations’ activities. The Prosecutor’s argument claims that the 2017 meeting was organised under the guise of a training actually aimed to bring together supporters of three unrelated groups: Fetullah Gülen Movement/Parallel State Structure (FETÖ/PDY), Kurdistan Workers’ Party (PKK/KCK), and The Revolutionary People’s Liberation Party-Front (DHKP-C), of which the two latter are recognised as terrorist organisations by the European Union, Turkey, and United States of America.

Even though the training was given as the principal reason to lodge the case against the human rights defenders, the Prosecution’s case cites ‘evidence’ from the defendants’ personal lives, including the mere possession of human rights-related documents, to ‘prove’ the terrorist conspiracy. This includes, for example phone calls and money transfers to/from individuals who had previously been investigated or tried for alleged terrorist activities. Throughout the lengthy trial, defence lawyers have presented the facts that the majority of individuals with whom the  ‘Istanbul 10’ defendants were in contact have been acquitted of the charges levied against them—which should mean that such contact is not prosecutable and can no longer be used in the Prosecutor’s argument presented in the indictment. The Prosecutor’s case fails to take into account such exculpatory evidence provided by the defence team over the last two and a half years, in fact presenting the original indictment—including evidence that had been proven to be false earlier in the trial—all over again. Secondly, the Prosecutor’s argument lacks any proof of causal links between the purported evidence and the alleged crimes, e.g. how the civil society activities aided or benefitted the terrorist organisations. The case is also characterized by severe fair trial rights’ infringement. For example, the Prosecution introduced new evidence in the dictum without sharing the content thereof with the defendants or their lawyers, preventing a thorough interrogation and defence against said evidence. Moreover, despite the obligation of the Prosecution itself to also inform the Court of, and to present, exculpatory evidence in favour of the defendants, this duty was not met. Finally, the Prosecution provided no explanation for the request for imprisonment for six defendants, while the remaining five were to be acquitted. Taking the above-mentioned issues into consideration, the Prosecution’s case lacks legal grounding, rests on arbitrary decisions, and represents a clear attack on the human rights work of the defendants. In line with the defendants’ right to an effective defence, the judge postponed the hearing to provide the defence time to prepare their reaction against the newly-introduced evidence and the Prosecutor’s case which had not been shared with the defence with sufficient time ahead of the last hearing.

Believing that civil society work aiming to advance human rights is an essential pillar of any healthy society, the undersigned national and international human rights NGOs appeal for the acquittal of the eleven human rights defenders.