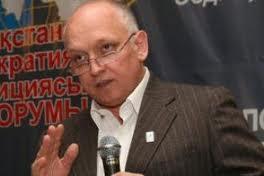 The sitting of the appellation instance court regarding the case of “Alga!” opposition party leader Vladimir Kozlov took place in Mangistau regional court on November 20, 2012.  It is reported that Kozlov has been sentenced to 7,5 years of imprisonment on a charge of organizing a criminal group, instigating social hatred and calling to overthrow the constitutional regime.  The appeal court represented by judge G.Sharova did not grant an appeal of Vladimir Kozlov’s defense and upheld the first instance court ruling.

The members of the Kazakhstan International Bureau for Human Rights and Rule of Law have been monitoring this criminal case both in the first instance court and during the sitting of the appeal court.  Therefore we can take the liberty in giving independent assessment of the process in a form of the following statement.

Based on personal observations, assessment of independent experts, referring to the effective laws of Kazakhstan and being guided by the principle of respect for human rights the Kazakhstan International Bureau for Human Rights and Rule of Law believes that decision of the appeal court to uphold the accusatorial sentence to Vladimir Kozlov cannot be considered fair, impartial and unbiased. This conclusion is based on serious procedural violations detected during 19.11.2012 appellation instance court trial of Mangistau regional court.  These violations, we believe, have seriously restricted the convict’s rights and have led to impossibility to exercise full-fledged defense in court.

One of the most serious violations was that Vladimir Kozlov has not been brought to court, leading to absence of the defendant during his own trial.  We find this to be the grossest violation of the criminal procedure laws, which stipulate the right of the defendant to be present during the appeal trial.  In having done so the court has deprived Kovlov of his right to full defense.  The right guaranteed by the law and Kazakhstan’s international commitments has been violated by the court.

The judge has “forgotten” about Kozlov’s appeal during the trial.  The court did not announce and did not study arguments described in the appeal.  Not only  Kozlov was absent in court, but also his appeal was not considered.  This is yet another grave violation of the right to defense.

Apart from Kozlov himself, two more defendants filed in the case (A.Aminov and S.Sapargali) were also not present during the appeal trial, along with their defense attorneys, whose attendance is required in the context of complaints procedure and to ensure impartiality of the proceedings.

In fact there was no actual consideration of a complaint as such.  Objections expressed by defense attorneys to the first instance court ruling have been ignored in general and public prosecutor gave no appropriate legal assessment to these objections.  Consequently, the arguments brought forward in the complaint referring to biased nature of the investigation, absence of evidence of guilt and partiality of the court who sentenced the defendant to 7,5 years of incarceration were left unattended.

The indicated violations, including the fact that accusations against Kozlov in instigating social discord, organizing a criminal group and calling to overthrow the existing regime have not been proved in court add to already established opinion about political aspect of this trial.

We find the ruling of the court a demonstration of the general tendency to persecute political opposition and dissent in Kazakhstan.  In this regard the Bureau voices its protest against gross violation of the national and international laws and condemns the practice of using judiciary as a tool to conducts reprisals against political opponents.

Brief note on violations of the right to defence and other procedural violations during court trial of V.Kozlov you can read HERE