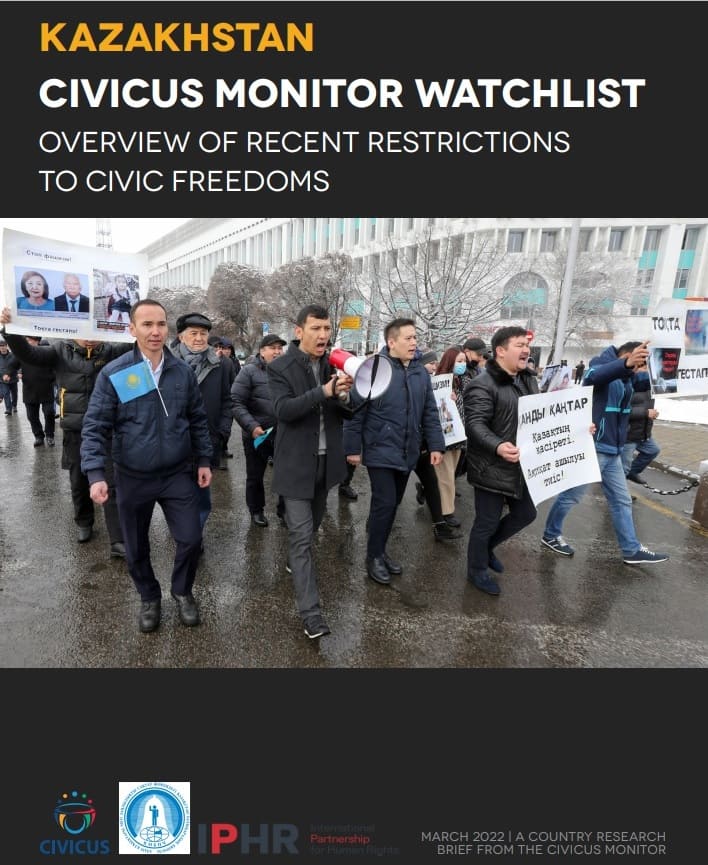 Kazakhstan has been added to a watchlist of countries that have seen a rapid decline in civic freedoms. Following January protests, the government continues to crackdown on peaceful protesters, civil society activists, opposition party supporters and independent journalists.

The new watchlist is released by the CIVICUS Monitor, an online platform that tracks the latest developments to civic freedoms, including the freedoms of expression, association and peaceful assembly, across 197 countries and territories. Other countries included on the watchlist are El Salvador, India, Tunisia, Russia and the United Arab Emirates.

On 2nd January 2022, peaceful protests over a sharp increase in fuel prices began in Kazakhstan’s Mangystau region. In the days that followed, the protests spread to other regions, with thousands of people voicing demands for broader social and political change. Under circumstances which remain unclear, protests escalated into violence, and security forces responded with excessive and lethal force. As a result, over 200 people were killed and thousands injured. Peaceful protesters, activists and bystanders, including children, are among those killed.

The intense security operations included the detention of over 10,000 people, many of whom had not been involved in any violence or unlawful acts, and were solely exercising their right to peacefully protest. Journalists and human rights activists were among those detained. In some cases, detainees were reportedly held in makeshift detention centres and denied access to legal assistance and the right to inform their relatives about their whereabouts, with alarming allegations of the use of torture and ill-treatment against detainees. Concerns about the authorities’ response to the January events are reinforced by their broad use of “terrorism” rhetoric and the president’s controversial order to security forces to ”shoot without warning” when putting down the unrest that ensued.

“As called for by UN experts, the Kazakhstani authorities should refrain from misusing the term ‘terrorism’ and ensure that such allegations are not used to stigmatise, discredit and silence those who are peacefully voicing dissenting opinions and protesting about the current situation in the country. At this time, it is crucial that the authorities uphold their international obligations with respect to fundamental freedoms in order to ensure sustainable security,” said Aarti Narsee, Civic Space Research Officer at CIVICUS.

Close to 3,000 criminal cases were under investigation as of early February 2022 in relation to the January events. These include cases initiated against peaceful protesters, civil society representatives and opposition activists, some of whom have been charged with broadly worded criminal offences such as “knowingly spreading false information’’ and “inciting hostility’’, which can be widely used and interpreted to stifle legitimate free speech.

“Given the shocking scale of the loss of life and the widespread human rights violations reported in connection with the January 2022 protests, it is of utmost importance that these events are investigated in a comprehensive, impartial and effective manner and that all those responsible for violations are held accountable. The Kazakhstani authorities should seek cooperation with the international community to this end and welcome the efforts of human rights groups to document and ensure justice for violations,’’ said Brigitte Dufour, Director of International Partnership for Human Rights (IPHR).

An information blockade also ensued during the January events, with a nation-wide internet shutdown lasting several days and authorities obstructing journalists who were reporting about the crisis. Several internet resources were blocked because authorities alleged they contained false information about the protests. Several journalists from independent media have been summoned for questioning about their work during the protests, with at least one journalist under criminal investigation in relation to the January events.

Authorities have also targeted opposition movements, including the banned Democratic Choice of Kazakhstan and the Koshe (Street) Party, as well as the unregistered Democratic Party of Kazakhstan and other groups. People affiliated with these movements have reportedly been detained, questioned and prosecuted because of their peaceful participation in the protests, with several of them alleging to have been ill-treated in detention.

“The Kazakhstani authorities must refrain from using the January 2022 events as an excuse to crack down on civil society activists, human rights advocates, opposition supporters and independent journalists who criticise the authorities, speak out about injustice and repression, and call for democratic and social change in the country. They should immediately drop any criminal charges initiated against such actors in retaliation for their legitimate exercise of their freedoms of expression, peaceful assembly and association and put an end to intimidation and harassment against them,” said Yevgeniy Zhovtis, Director of Kazakhstan International Bureau for Human Rights and Rule of Law (IPHR).

Kazakhstan is currently rated Obstructed by the CIVICUS Monitor. There are a total of 43 countries in the world with this rating (see all). This rating is typically given to countries where civic space is heavily contested by power holders, who impose a combination of legal and practical constraints on the full enjoyment of fundamental rights (see the full description of ratings).

The Report is available HERE

IPHR and KIBHR cooperate with the CIVICUS Monitor on the preparation of regular updates on civic space developments in Kazakhstan.