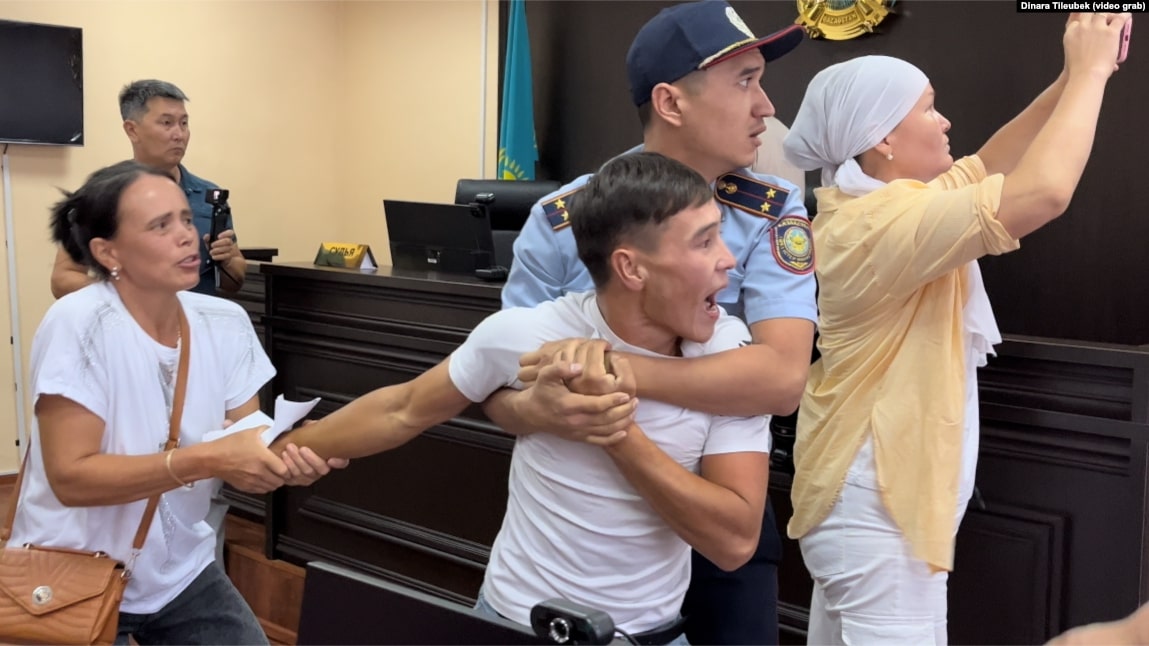 Scuffles between protesters and police broke out in the southern Kazakh city of Shymkent after a court upheld the sentences of three activists who were convicted for taking part in mass anti-government demonstrations in January.

Angry relatives and supporters of Qairat Sultanbek, Lazzat Dosmambetova, and Zhanmurat Ashtaev, ran after the judge as he quickly left the courtroom following his verdict on September 8 before bailiffs and police officers intervened, leading to a brawl.

The melee was pushed out of the court building where dozens more activists joined in scuffles with the police.

In mid-July, the Al-Farabi district court sentenced Sultanbek, 48, and Dosmambetova, 51, to 3 years and seven months in prison each, while Ashtaev, 44, was handed 3 years and one month in prison. All were convicted of taking part in mass disorders, a charge all three have rejected.

The protesters demanded that the judge or a prosecutor explain why the activists’ sentences were upheld, insisting that they were innocent.

Police attempted to detain some of the protesters, but failed to so as the activists’ supporters and relatives interfered.

Meanwhile, police inside the court’s building detained Ashtaev’s four brothers and took them away to a police station.

Afterward relatives of the activists gathered in front of the court building with headbands saying “Hunger Strike.” They said that they will remain at the site until their demands for the release of the activists are met.

Authorities in Shymkent say 20 individuals died and 207 were injured in the city during the unrest, which was initally sparked by a fuel-price hike and then quickly turned into broader anti-government protests.

Last week, Kazakh President Qasym-Zhomart Toqaev said a mass amnesty will be declared soon for all individuals involved in the unrest and its aftermath, including law enforcement officers. Many relatives of those killed and arrested during and after the unrest viewed the clemency idea as a move to evade investigations of the deadly January developments.