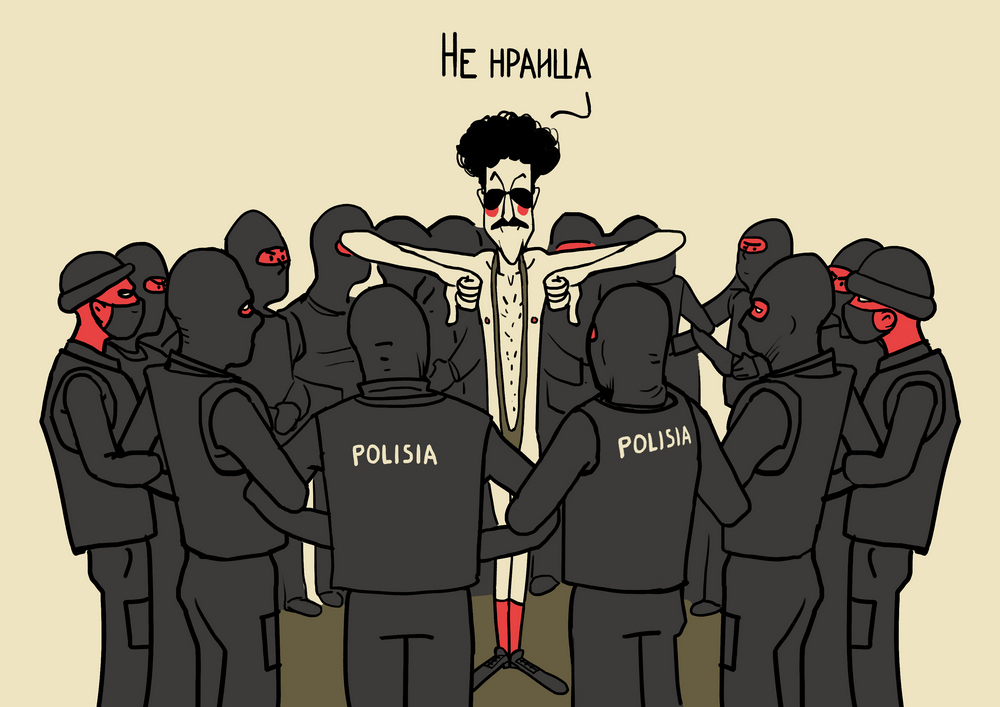 Since June 2020, Kazakhstan’s police have practiced kettling which is the encirclement of peaceful protesters without allowing them to leave the circle, go to the toilet or have food and water passed to them. People were held for a maximum of 10.5 hours, with some of the protesters fainting and getting frostbites. In some cases, the police detain those who have been kettled. However, the police rarely draw up detention reports for an alleged violation of law and order by those kettled, nor do they subsequently prosecute them administratively or criminally. So, judging by the reaction of the police, these individuals are often not regarded as offenders from the point of view of Kazakhstani law.

Also during kettling, peaceful protesters are surrounded by people who are controlled by the police and city officials and who insult those inside the circle, attempt to provoke fights, bring sound-amplifying equipment and turn on the music at full volume, psychologically attacking the protesters for hours.

The police refuse to investigate claims filed those unlawfully detained, and the Prosecutor’s Office and the Ombudsman do not see this as a violation of the rights of Kazakhstani citizens.

In all the cases, people were kettled by special police units. As a rule, the number of police officers is three to four times higher than that of protesters. It is impossible to identify the policemen, as their faces are hidden behind masks. Police officers do not explain to the encircled people their rights or the reason for the encirclement.

The laws of Kazakhstan lack any norms or regulations on the use of kettling, which means that the police cannot refer to the local legislation.

According to the Regulatory Resolution of the Constitutional Council of the Republic of Kazakhstan dated April 13, 2012, detention means “a coercive short-term measure […] to restrict personal liberty of a person by authorized state bodies, officials and other persons on the grounds and in the manner prescribed by law,” while actual detention means “a restriction of liberty, including freedom of movement, or forced detention in a certain place […], as well as any other action substantially restricting personal liberty, regardless of the procedural status or other formal procedures applied to the detainee, measured from the exact minute when the detainee’s liberty, including freedom of movement, was restricted.” However, these definitions do not apply to those kettled.

Article 39.1 reads that “The rights and liberties of an individual and a citizen may be restricted only by law and only to the extent necessary to protect the constitutional order, public order, human rights and freedoms, health and morals of the population.” That said, kettling has no definition in the laws of Kazakhstan.

In addition, the actions of police officers violate Article 32 of the Constitution of the Republic of Kazakhstan, reading that “Citizens of the Republic of Kazakhstan have the right to gather peacefully and without weapons, hold meetings, rallies and demonstrations, marches and pickets. The exercise of this right may be restricted by law in the interests of national security, public order, public health, or protection of the rights and freedoms of others,” as the citizens in these cases did not violate the law and public order.

Police actions also violate the International Covenant on Civil and Political Rights (ICCPR), ratified by Kazakhstan on February 11, 2009 and directly applicable in Kazakhstan.

Article 9.1: “Everyone has the right to liberty and security of person. No one shall be subjected to arbitrary arrest or detention. No one shall be deprived of his liberty except on such grounds and in accordance with such procedure as are established by law.”

Articles 12.1 and 12.3: “1. Everyone lawfully within the territory of a State shall, within that territory, have the right to liberty of movement and freedom to choose his residence”; “3. The above-mentioned rights shall not be subject to any restrictions except those which are provided by law, are necessary to protect national security, public order (ordre public), public health or morals or the rights and freedoms of others, and are consistent with the other rights recognized in the present Covenant.”

Article 21: “The right of peaceful assembly shall be recognized. No restrictions may be placed on the exercise of this right other than those imposed in conformity with the law and which are necessary in a democratic society in the interests of national security or public safety, public order (ordre public), the protection of public health or morals or the protection of the rights and freedoms of others.”

In addition, the cases of the use of kettling in Kazakhstan contradict the principles of international organizations, whose full member is the Republic of Kazakhstan. These are:

– Guidelines on Freedom of Peaceful Assembly (developed by OSCE/ODIHR and the Venice Commission of the Council of Europe); and

– General Comment No. 37 of the UN Human Rights Committee on Article 21 of the ICCPR.

The Criminal Code of the Republic of Kazakhstan includes two articles that can be applied to police officers for the unlawful use of kettling.

Article 146. Torture. “An intentional infliction of physical suffering and (or) emotional distress committed by an investigator, a person conducting an inquiry, or another official or person with their instigation or with their knowledge or acquiescence, to obtain from the tortured or another person information or confession or to punish them for an act which they or another person has committed or is suspected of having committed, or to intimidate or coerce them or a third person or for any reason based on discrimination of any nature.”

Article 362. Abuse of power or official authority. “An abuse of power or official authority, i.e. the commission by a person authorized to perform official functions or by a person equivalent to them or to an official of acts clearly beyond their rights and powers that damage substantially the rights and legitimate interests of citizens or organizations or legally protected interests of society or the state.”

Official reaction to the cases of kettling in Kazakhstan

Kanat Taimerdenov, Head of Almaty Police Department, answered journalists’ questions at a briefing held on December 28, 2020, why Oyan, Qazaqstan and Democratic Party activists who gathered on December 16 in Republic Square, were blocked by the police. “We told them, but they wouldn’t [listen]. There were representatives of the mayor’s office, the prosecutor’s office, who explained the norms of the law, but they did not obey,” he said[9].

“An internal investigation has found no criminal offenses in the actions of police officers. In this regard, on February 10, 2021, A. Rakhimbay, investigator at the Almaty Anti-Corruption Service Department, filed this material to the nomenclature archives,” reads the response from the Prosecutor’s Office to the claimant Aizat Abilseit, an affected activist of the youth movement Oyan, Qazaqstan[10].

Finally, on March 1, 2021, Elvira Azimova, Human Rights Commissioner (Ombudsman) of the Republic of Kazakhstan, told in a telephone conversation with Radio Azattyk (the Kazakh RFE/RL service) that, “There are OSCE recommendations in this regard. This is a measure related exclusively to security. The use of this measure should be approved as a norm based on an open dialogue with civic activists.”[11]

Attempts to appeal the actions of the police

Oyan, Qazaqstan activists filed two court complaints against the actions of the Prosecutor’s Office and the Anti-Corruption Service, which had ignored the use of kettling by the police.

The complaint filed by Aizat Abilseit against the Prosecutor’s Office and the Anti-Corruption Service, which had found no offense in the hours-long kettling of activists on January 10, 2021, the day of the parliamentary elections, was dismissed by the court. The ruling was made on March 12 by Maral Zharylgasova, judge of the Almaty Specialized Inter-district Investigative Court.

The Anti-Corruption Service, to which Ms Abilseit appealed, referred the materials to the Internal Security Division of the Almaty Police Department for an official investigation, and the department found no grounds to prosecute its employees. On February 15, Ms Abilseit received a response from the Prosecutor’s Office, which had found that the kettling had not been a “criminally punishable act.”[12]

On March 15, 2021, the Almaty Specialized Inter-district Investigative Court dismissed a complaint filed by Darkhan Sharipov, another member of the Oyan, Qazaqstan opposition movement, against the Anti-Corruption Service and the Almaty Prosecutor’s Office.[13]