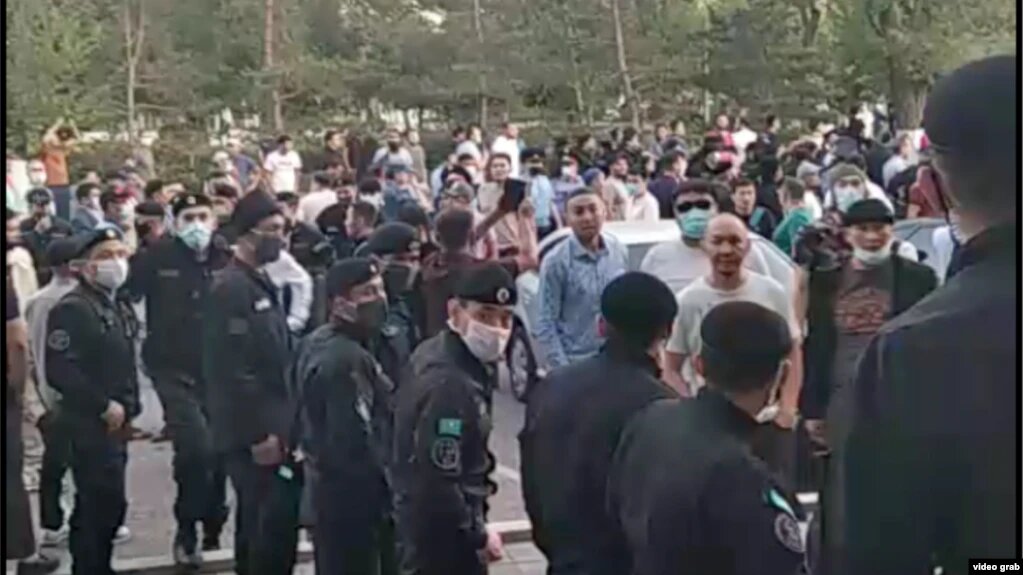 On 29 July 2021 in Karaganda, a city in central Kazakhstan, an angry mob of men, emboldened by the silent agreement of the police standing by, disrupted a small “closed” training session that had been organised by Feminita to discuss the rights of women, LGBTQ community and, generally, human rights. The mob’s aggressive behaviour, as well as the calls for violence against the participants of the training, had prompted the latter to rush out of the business centre building. They went through a police-formed corridor, to be taken to a police station. According to the meeting participants’ account, when they arrived at the police station, a man in civilian clothes demanded they give him their personal information.

Even before the crowd had gathered, deputy city akim Nurlan Bikenov and head of the city’s internal policy department Lyazzat Akilzhanova demanded that the meeting be dispersed. As the meeting participants were going through the corridor to get on the buses, they were subjected to insults and were hit by the people from the crowd. As this was happening, the police failed to see any “violations of public order and mass unrest” (https://polisia.kz/ru/metodichnye-dejstviya-politsejskih-predotvratili-obostrenie-konflikta-v-karagande/). Moreover, a police press release openly called the Feminita participants “representatives of the LGBT community,” apparently ascribing a negative and stigmatising tone to it.

It should also be noted that the hotel where the participants had made a reservation for the training refused to provide the organisers with a room. After that, the organisers switched to a secret plan “B;” however that information has leaked out somehow.

Earlier on, on 29 May 2021, the organisers behind the training, Feminita directors Gulzada Serzhan and Zhanar Sekerbayeva from Almaty, while trying to put together a similar event in the southern city of Shymkent, were also attacked under similar circumstances. Among the attackers were police officers and, allegedly, plain-clothed special agents. During the attack, Zhanar Sekerbayeva was hit in her face. Just like in Karaganda, they were taken to a police station, where a report filed by a district police officer ended up in a criminal case being initiated against one of the women, on the grounds of “insulting a representative of authorities.” Just like in Karaganda, the hotel bailed at the last minute and cancelled a reservation, so the meeting had to be relocated to a cafeteria.

Both the attacks and the actions or failure to act by the police suggest that they might have been planned out and not spontaneous, possibly with direct participation of government authorities.

It is not rare when in different corners of the country participants in feminist organisations and representatives of LGBTQ community have to endure discrimination and harassment at the hands of local residents, while the authorities and law enforcement fail to act at best or, at worst, might even be involved in the aggression campaigns or perpetrate such behind the curtains, as it often happens in relation to opposition activists, independent journalists and human rights defenders.

The Kazakhstan International Bureau for Human Rights and the Rule of Law is seriously concerned and appalled by this incident. We demand that an investigation be carried out without delay, and that the authorities make their reaction known in respect of such a blatant violation of human rights. If the attack perpetrated in Karaganda is not investigated and given an adequate assessment, it will only reinforce our suspicion that the government authorities might be encouraging them.

As a full-fledged participant to the International Covenant on Civil and Political Rights, the International Covenant on Economic, Social and Cultural Rights, the Convention on the Elimination of All Forms of Discrimination Against Women, Kazakhstan must respect its voluntarily commitments and prevent any discrimination and harassment on any ground, by any party.